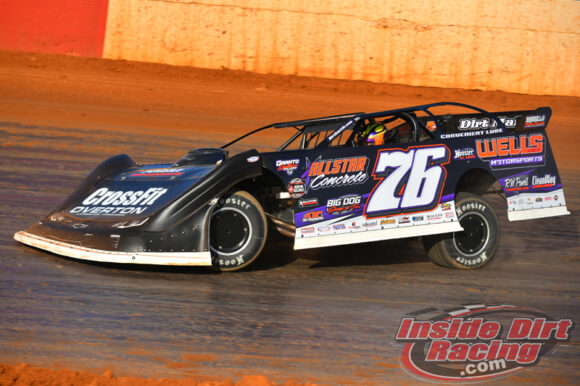 Brandon Overton got the first win of the week in Eldora

Dirt Late Model racers from all over the country pulled through the gates of the sport’s most historic venue for the first of a four-night event that will be highlighted by not one but two Dirt Late Model Dream features that will pay more than $125,000 to those winners. But on Wednesday, the field was divided into two groups for the purpose of contesting two separate shows.

In Group A on the first night of competition it was Brandon Overton who stood on the famed Eldora Speedway stage to receive the accolades as one of the two victors. The Evans, GA driver earned $10,000 for his efforts.

A total of 74 cars were signed in for competition.

Devin Moran took the win in the first Group A heat of the night ahead of Tim McCreadie, Dale McDowell, Max Blair and Stormy Scott then Ricky Weiss was victorious in the second preliminary besting Chris Ferguson, Ryan Gustin, Shane Clanton, and Kyle Bronson.

At the start of the 25-lap feature, Scott went to the early lead with Bronson, Overton, Simpson, and Lanigan trailing. Overton moved in to challenge Bronson for second as Scott worked to slip away. Lanigan began to move up when he took fourth away from Simpson on lap 5.

By lap 10, Scott, Bronson, and Overton fought for the top spot as they encountered slower traffic. One lap later, Overton was able to wrest the runner-up position away from Bronson.

Hudson O’Neal slowed to bring out a caution on lap 12 with Scott leading Overton, Bronson, Lanigan, Simpson, Weiss and Moran.

Just after the restart, a wild battle ensued between Bronson, Lanigan, and Simpson as they went three-wide for positions 3 through 5. Meanwhile, Overton was hounding Scott for the lead of the race.

On the final restart, Overton drove away from those who battled for position behind him and eventually sailed under the checkered flag to pick up the win.