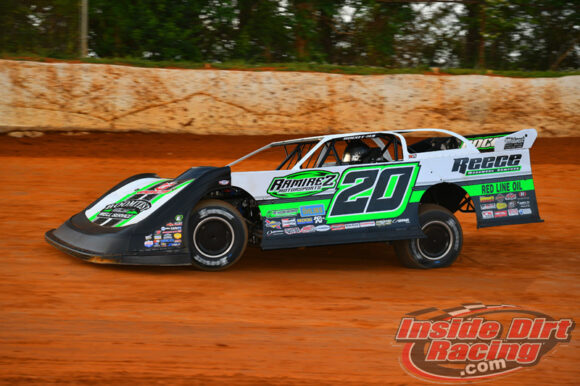 The World of Outlaws Morton Buildings Late Model Series journeyed to Beaver Dam Raceway on Tuesday night as that series works its way toward the USA Nationals to be held this weekend at Cedar Lake Speedway. Jimmy Owens dominated the feature and came away from the Wisconsin track as the victor. The Newport, TN driver earned $10,000 for the victory.

Ashton Winger led the way in Group A qualifying with a lap of 14.434 seconds around the third-mile clay oval to beat out Brian Shirley, Dennis Erb Jr., Billy Moyer and Scott Bloomquist.

Jimmy Owens was fastest in Group B time-trials with a time of 14.928 seconds to top Frank Heckenast Jr., Kyle Bronson, Cade Dillard and Rick Eckert.

Dennis Erb Jr. took the first heat of the night over Ryan Gustin, Ricky Weiss and Darrell Lanigan while Billy Moyer was the victor in the second preliminary of the night ahead of Brian Shirley, Brandon Sheppard and Mike Marlar.

The WoO Late Models redraw placed Owens on the pole with Dillard, Moyer, Erb, Heckenast, Bronson, Gustin and Shirley lining up in order behind the pole sitter.

Dillard went to the early lead when the green flag waved over the 50-lap feature followed by Owens, Moyer, Erb and Heckenast. Just behind the top-5 the cars of Shirley and Gustin battled for sixth.

Dillard and Owens looked as if they might pull away from the pack until a caution flag waved on lap for a tangle involving Swedberg and Larson. On that restart Shirley moved up to fourth then took on Moyer for third with Dillard and Owens continuing to lead the pack.

Owens moved in to challenge Dillard for the lead on lap 7 while Shirley and Moyer mixed it up for the third spot. Dillard jumped the cushion on lap 10 which opend the door for Owens to assume the top spot on the leader board.

Owens began to pull away despite the fact that he was in traffic while Dillard fell back into the clutches of Moyer. However, a caution for the stalled car of Marlar on lap 15.

Following the restart, Eckert slowed with a flat tire. At the same time, Lanigan pulled into the pits with a broken shock mount.

Moyer moved to second on the lap 15 restart but Owens began to pull away. Meanwhile, Shirley, Gustin and Heckenast ran in tight formation for positions 4-6.

Gustin and Shirley exchanged the fourth position on lap 20 and 21 while Dillard closed in to fight Moyer for the runner-up spot.

Disaster almost struck Owens when on lap 27 the slower car of Swedberg tangled with the race leader while trying to pull into the infield. Caution then waved for the near mishap as Owens maintained the lead.

The final 23 circuits ran caution free with Owens pulling away from the field. At the same time, Moyer, Dillard, Gustin and Shirley engaged in a fierce fight for the right to follow Owens.

But in the end, it proved to be a dominating performance for Owens as his scored his fourth World of Outlaws Morton Buildings Late Models Series win of the season.