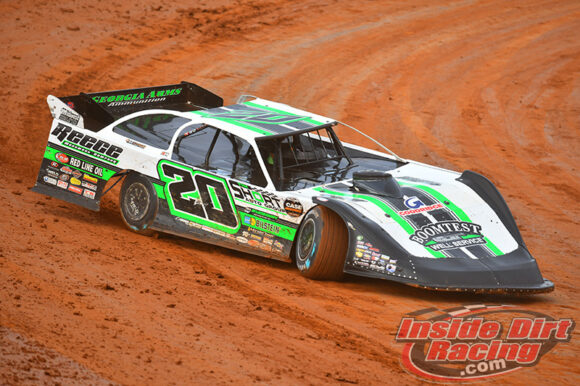 The Rocket Chassis driver from Newport, Tennessee earned $10,000 for his victory at the Maryville, Tennessee track.

Feature Re-cap: At the start of the 40-lap feature it was Owens who bolted to the front of the pack with Clanton, Ferguson, Hedgecock and Weiss following in his tire tracks. However, a lap 2 caution for a multi-car tangle that involved Weiss, McDowell, Gustin, O’Neal and Hedgecock with the caution being called on Weiss which placed all others back in their spots.

When the racing action resumed, series points leader Erb closed in to fight with Ferguson for fifth. Ferguson held the position while further ahead it was O’Neal who would take third away from Hedgecock on lap 5. Soon after, Ferguson moved around Hedgecock for fourth.

At the front of the field, Owens had begun to pull away until he encountered slower traffic which allowed second-running Clanton to close in just before a lap 15 yellow flag waved. On the restart, O’Neal blasted to second as Erb would soon rise to fifth.

Owens had built a lead of more than a straightaway by the halfway point while Erb, Hedgecock, Blair, English and Freeman were engaged in a fierce fight for positions at the back of the top-10.

On lap 29, Owens had a close call when a slower car he was lapping squeezed him into the outside wall at the flagstand. That brief mishap allowed O’Neal to close in until the No. 71 would bang the outside wall in turn four one lap later after appearing to have a tire go down.

O’Neal’s trouble lifted Ferguson to the runner-up spot for the lap 30 restart. However, Owens would jump out to a lead of approximately 10 car lengths and hold that advantage until he sailed under the checkered flag to score the victory.

Click on the play button below to hear our post-race interview with Jimmy Owens.