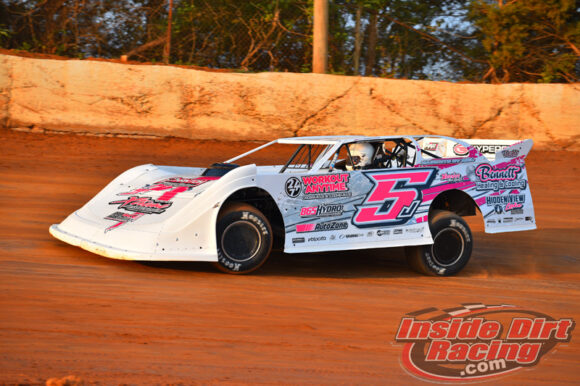 Along with the World of Outlaws Late Model Series race on Saturday night the 411 Motor Speedway the Seymour, Tenn. track also staged racing in its regular Crate Late Model division. Jesse Lowe of Crossville took the lead during the early stages of the race then drove away from the competition to score the win.

Trevor Sise was fastest in the qualifying session as he turned a lap of 14.974 seconds to claim the pole position for the main event. Jesse Lowe, Jensen Ford, Rusty Ballenger, Jason Trammell, Chip Brindle, Bradley Lewelling, Terry Poore, Layne Clifton and Zach Sise would round out the top-10 on the starting grid.

Sise jumped out to the early lead when the green flag waved to start the 25-lap feature. The No. 73 machine was followed by Lowe, Ford, Ballenger and Brindle at the completion of the first circuit. Ballenger briefly passed by Ford in an attempt to capture the third spot but Ford regained the position one lap later. That left Ballenger to fall back into the clutches of Brindle who moved by and assumed fourth place.

Lowe closed in on Sise and began making a bid for the race lead on lap 7. After two laps of intense side-by-side racing, the Sise car drifted high off of turn 2 and made contact with the outside wall causing enough damage to knock the pole sitter and early race leader from the event. 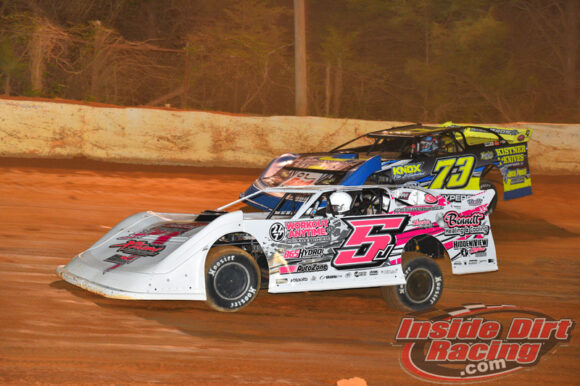 Lowe and Sise battling for the lead

On the lap 9 restart following Sise’s demise, Brindle was able to gain the runner-up spot while Ballenger suffered front end damage and fell back. Zach Sise shot forward on that same restart and locked himself into a battle with Ford for third. Meanwhile, Lowe was at the front of the pack and slipping away from his pursuers.

Ford would temporarily hold off the advances of Sise and would himself look to move ahead as he engaged in a fight for second with Brindle on lap 15.

Ford would lay claim to the runner-up spot following a lap 16 restart while Zach Sise grabbed fourth away from Lewelling. Again, however, Lowe set about the business of putting distance between himself and the rest of the field. 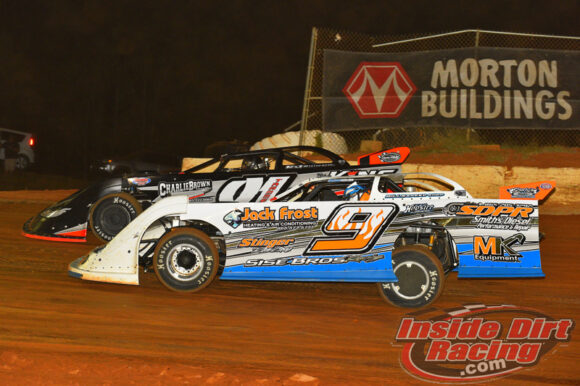 One lap later Sise would take third away from Brindle following yet another restart.

Over the closing laps Lowe maintained a comfortable margin while Ford and Sise battled for second. But none would catch the No. 5J machine as Lowe drove under the checkered flag to seize the victory.