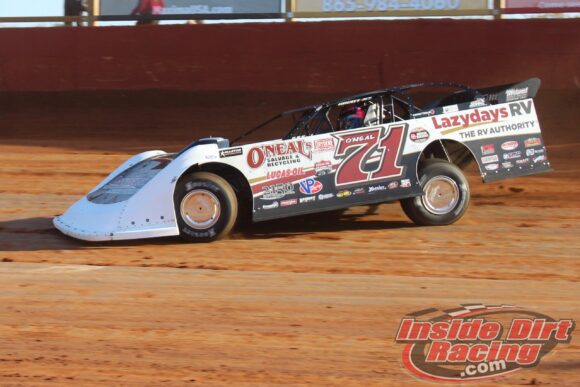 Following Saturday night’s postponement at Brownstown Speedway, the Lucas Oil Late Model Dirt Series took to the track at Atomic Speedway for the first time since February 2nd when the tour concluded its run during Georgia-Florida SpeedWeeks. At the end of the evening, it was Double Down Motorsports pilot Hudson O’Neal who claimed the win. The Martinsville, IN driver earned $12,000 for his efforts at the Alma, OH track in a race shown live by Lucas Oil Racing TV.

Fresh off his $50,000 win on Saturday night in the Bristol Dirt Nationals, Jonathan Davenport set the fast time in Group A qualifying with a lap of 13.938 seconds around the 3/8 mile clay oval to top Hudson O’Neal, Steve Casebolt, Tyler Carpenter and Kyle Strickler.

Kyle Strickler would start the feature from the pole by virtue of winning the first heat race of the night besting Jonathan Davenport, Brandon Sheppard and Steve Casebolt while Hudson O’Neal defeated Tanner English, Josh Rice and Billy Moyer Jr. in the second preliminary.

At the start of the 50-lap feature it was Strickler who went to the early lead with Moran, O’Neal, Pearson and Davenport in his wake. Pearson briefly moved around O’Neal for third but the No. 71 regained the spot.

Moran and Strickler fought over the lead on lap 4 with Moran taking the position. Further back, McCreadie blasted into fourth. O’Neal moved forward on lap 7 by passing Strickler for second. Just behind, Pearson was engaged in a fierce fight with Erb and Davenport for positions 5-7.

A caution for Josh Rice briefly slowed the action. On the ensuing the restart, O’Neal got around Moran for the race lead. But Moran fought back along with Strickler as those driver went three-wide with O’Neal for the lead. McCreadie then stepped up and took third away from Strickler on lap 10.

Intense racing behind O’Neal for the remaining positions within the top-5 took place as Moran, McCreadie, English and Strickler exchanged spots as the race worked toward the halfway mark. Moran would eventually break from that battle and close in on O’Neal by lap 18.

Strickler then rejoined the fray as he and Moran swapped the runner-up spot on lap 19 just before Strickler would bring out a caution with a flat right rear tire.

McCreadie jumped to second on the lap 19 restart with English taking third, Moran falling to fourth, and Davenport breaking into the top-5. McCreadie then closed in and began applying pressure to the lead car.

McCreadie slipped by O’Neal on lap 25 but a caution flag waved for Clint Keenan which negated McCreadie’s pass.

McCreadie made another attempt to take the lead when green flag action resumed but O’Neal held back the challenge. Just behind, Bronson made his way into the top-5 and took up the battle with Moran for third. At the same time, Jimmy Owens rose to the sixth position after having started from the tail due to multiple issues during preliminary action.

The second half of the race saw almost all of its laps click off caution free with O’Neal maintaining control as the lead duo worked through slower traffic. A yellow flag with only two laps left in the event set up a final restart but O’Neal continued to hold the top spot.

O’Neal eventually sailed under the checkered flag to earn his second LOLMDS win of the season. With previous series points leader Brandon Overton not in attendance, O’Neal took the lead in the overall standings.