Spring Nationals set to begin with increased points fund; Fall Nationals may be nixed for 2021 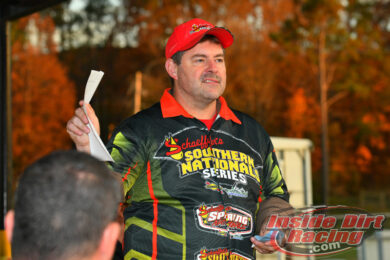 The Schaeffer’s Oil family of racing series promoted by Ray Cook are always among the most anticipated events during each racing season throughout the southeast. And that anticipation will be satisfied beginning this Saturday night when the Schaeffer’s Oil Spring Nationals kicks off its 2021 campaign at the I-75 Raceway. That race will offer the biggest payout in the history of the Sweetwater, TN track as drivers and teams will be vying for a purse that will dole out $10,053 to the eventual winner.

Because of the onset of the coronavirus pandemic in the late winter and spring of 2020, the entire Spring Nationals schedule had to be scrapped as shutdowns became commonplace nationwide. Once racing action resumed in late spring and early summer, both national and regional tours were forced to seek out the states that would allow for sporting events to take place either with no fans in the stands or with limited numbers of people permitted to pass through the turnstiles.

Cook is anxiously awaiting the resumption of his Spring Nationals mini-series but also points out that openings on the schedule were difficult to come by due to the influx of racing series looking for places to stage events.

“We’re glad to get the Spring Nationals back this year and looking forward to it because we’ve got a great schedule,” the racer/promoter declared in an interview with InsideDirtRacing.com. “It’s just hard to get dates because everybody migrated to our area with the political thing the way it is, our governors, for the most part Tennessee and Georgia let everybody race but in North Carolina they didn’t so all the national tours migrated to us. Our area is flooded with big races right now. It’s hard to find a spot but that’s a good thing if you’re a race fan or a racer because you’ve got a lot of places to go.”

With that difficulty of finding dates taken into consideration, Cook has an ace in the hole with his own Tri-County Race Track in Brasstown, NC. That facility was among the first to host a race last year following the pandemic-related shutdowns when Shane Clanton claimed the $4,000-to-win Tarheel Invitational on April 30th.

“We were able to race last year but we just had to watch the fan count,” Cook explained of his track. “Our local officials did a great job of giving us things to do and that’s actually where we did the first race back last year. We only allowed 75 people in. We got the purse paid and that was about it. We did it mainly just to try to get the sport back going and give everybody something to watch. We were glad to be able to do it.”

One particularly disappointing aspect of the cancellations during last season was the fact that the Spring Nationals missed out on what would have been a huge race at Tazewell(TN) Speedway as a $21,000 payout would have awaited the victor. Undeterred however, that race will go on in 2021 with the same extraordinary purse. And more, the fast qualifier could earn an additional $2,100 provided by Toyota Knoxville if the team preregistered for the race before the deadline of last weekend.

Cook went on to point out that some scheduling for 2021 is still in question should more Covid restrictions have to be put back in place. With that in mind, it looks as if the Fall Nationals may be a victim of those difficulties. But in a sense, the racers may actually benefit from that tour’s pause.

“That’s correct, we just have to wait,” Cook said in answer to the question of some degree of uncertainty still being a part of the scheduling. “We actually are not planning on doing a Fall Nationals this year unless something changes. We usually pay $5,000 for each champion, but what I’m going to do is take the money out of the Fall Nationals(points fund) and pay $10,000-to-win in the Spring Nationals and $10,000-to-win in the Southern Nationals for the points champions. It should make it better for the racers. Money don’t necessarily mean you’ll gain more cars, but it will give whoever wins it double the money.”

Cook admits that what he does can, at times, be difficult. Ultimately though, he hopes the efforts of his team serve to benefit the sport of dirt racing.

“It is a lot of work. We’re trying to help the promoters all we can. We send them flyers two or three weeks before their race to make sure they get them out in the stores and we do all the advertising that we can. We’ve got a great product and we’ve got a great group of drivers that always come to support us. If you look at the history of who we’ve had, it’s really good.”