Home Blogs How does a Dirt Late Model race earn the title of ‘Crown Jewel’?

How does a Dirt Late Model race earn the title of ‘Crown Jewel’? 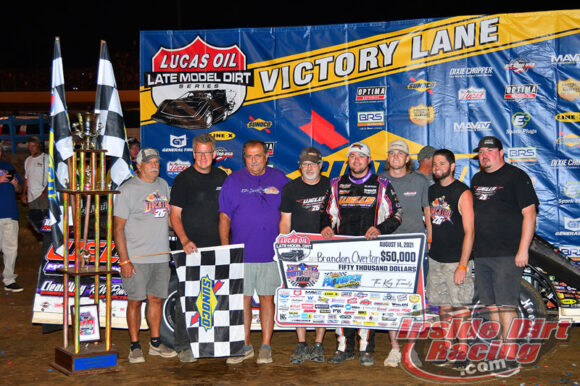 The 30th annual Show-me 100 will run this Saturday night at the Lucas Oil Speedway in Wheatland, Missouri and will, for many, mark the beginning of the ‘Crown Jewel’ portion of the Dirt Late Model schedule. This year, the Lucas Oil Late Model Dirt Series-sanctioned feature will offer a boosted purse with the winner’s share for the main event being bumped from $30,000 to $50,000. There will also be a pair of $6,000-to-win preliminary events held on Thursday and Friday to lead into the primary show.

As stated above, many consider this race to be a so-called ‘Crown Jewel’. But what exactly is it that earns a particular event the label of ‘Crown Jewel’?

There can be more than one crown jewel event within a particular sport. For the sake of comparison, NASCAR has three crown jewel races in the Daytona 500, the Coca-Cola 600(which will run this weekend), and the Southern 500. Golf has its four major championships and horse racing has a ‘Triple Crown’.

In this writer’s opinion, there are three factors that go into the label of crown jewel for Dirt Late Models. To earn that title, a race should meet all three of the criteria but there is room for exceptions in some instances. The three factors, as I see it, are tradition, purse, and the venue at which the race takes place.

An event must have tradition to be considered a crown jewel. There has to be enough history behind the race to make the winner’s trophy one that every driver in the sport would love to possess. There are several examples of events that meet this requirement including the two big shows held each year at Eldora Speedway- the Dirt Late Model Dream and the World 100 along with others such as the North-South 100 at Florence Speedway and the USA Nationals at Cedar Lake Speedway that fit the bill.

Fans who participated in a recent Twitter poll agreed that tradition is the most important factor in deciding whether or not a race can be called a crown jewel:

With the Show-me 100 coming up this weekend, here is a question for Dirt Late Model followers:

What is the biggest factor in labeling a race as a 'Crown Jewel'?

The purse money paid out to competitors is also a significant factor to be taken into account in the labeling of crown jewel races. The amount has to be enough that it would draw the sport’s top stars even if neither of the other qualifications were met. Something along the line of $40,000 or $50,000-to-win would be the minimum if a race is to be fit this category. There are some races that top drivers will enter because of the tradition or the venue, but for most to reach the highest status, there must be a lucrative payout at the end of the night.

One thing to note here, though, is that purse cannot be the only factor in placing a lofty status on a particular race. Several years ago, any race that paid out $30,000 or $40,000 to its winner would be vying for crown jewel status. Now, however, there has been a recent influx of new events paying $40,000 and even more added to the Dirt Late Model schedule but many of those races do not meet either of the other two requirements.

Those high paying races, many sanctioned by the XR Super Series, have been popular with racers because of the generous  payouts but lack tradition. That series only began operation as a fully functioning tour this year after contesting a number of stand-alone race weekends in 2021.

Finally, the site of the race is an important factor. There are some tracks that have a great deal of prestige within the dirt racing community which could allow one of their events that may not necessarily meet one of the other criteria to still achieve crown jewel status simply because of where it is being held.

Knoxville(IA) Raceway would fit into this category. The Lucas Oil Knoxville Late Model Nationals is relatively new when compared to some of the other events of its kind. But the race essentially achieved immediate placement among the crown jewels in 2004 when it was first contested because it offered a significant purse but also because it was being contested at one of dirt racing’s most historic of venues.

The ever popular Fairbury American Legion Speedway has evolved into one of those tracks where everyone wants to win because of the quality of racing it produces as well as the highly charged atmosphere that accompanies many of its shows. For that reason, a major race held on the Illinois track may reach crown jewel status even without other criteria being met.

The Prairie Dirt Classic is the biggest annual race held at FALS and most enthusiasts of Dirt Late Model racing call that show a crown jewel. However, it wasn’t until 2013 that the payout to the winner hit the $20,000 mark when it also fell under World of Outlaws CASE Construction Late Model Series sanction. Now, the PDC feature doles out $50,000 to its winner which, without a doubt, cemented that race’s position within the list of crown jewel events. So in this case, both the track and the purse serve as qualifiers.

There are several races that fit into the label of crown jewel. The World 100 and the Dirt Late Model Dream are, without a doubt, on that list. The North-South 100, the USA Nationals, the Dirt Track World Championship, Prairie Dirt Classic and Firecracker 100 are almost certainly ‘no-brainers’ as each of those events are highly coveted by the racers.

Ultimately, the old saying of beauty being in the eye of the beholder may well apply here. Particularly if the competitors think it’s a crown jewel, it may very well be as long as it has some tradition, pays a good purse, and is held at a top-tier facility.