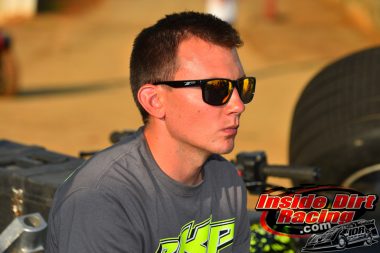 DUNN, NC (December 5, 2018) – Dunn Benson Motorsports and owner Kemp Lamm are excited to announce Devin Moran from Dresden, OH will pilot the iconic #1 for Dunn Benson Motorsports in 2019. Devin Moran is the son of Dirt Late Model Hall of Fame driver Donnie Moran who is known as one of the top five all-time great drivers over his career. Devin Moran along with his brother Wylie Moran will relocate to Dunn, NC after the first of the year and start preparing the Dunn Benson cars to run the full Lucas Oil Late Model Dirt Series in 2019 and contend for the series championship.

“Devin and his family are one of the most respected racing families in the industry. When I met Devin and Wylie earlier this year to discuss the possibility of driving my cars in 2019, I was immediately impressed with both Devin’s and Wylie’s maturity and knowledge of the racecars and their work ethic. I have always been a big fan of his dad, Donnie Moran, and think it is a perfect fit for two legendary families to partner together and chase a national championship. Devin has enormous talent and can win on the big stage even at his young age. We have been watching him for several years and seen him mature into one of the top dirt late model racers in country in our opinion. I just feel Devin and his family are a perfect fit for what Dunn Benson Motorsports, Dunn Benson Ford and what my dad built over the past 35 years”, stated Kemp Lamm, owner of Dunn Benson Motorsports and Dunn Benson Ford. 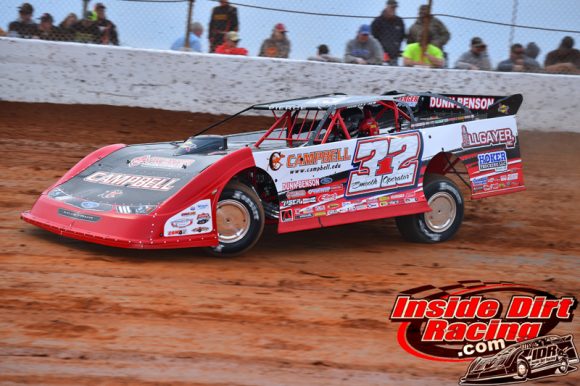 The Dunn Benson car was driven by Bobby Pierce in 2018

Dunn Benson Motorsports has partnered with Rocket Chassis and will use Pro Power Race Engines in 2019. The team will return to running the iconic #1 on the racecars that the late Carlton Lamm so loved seeing on his race cars.

“First I would like to thank Kemp Lamm and everyone at Dunn Benson Motorsports for the opportunity for Wylie and myself to work for one of the elite dirt late model race teams in the country. Were excited to have the chance to continue to chase our dreams and goals of winning a National Championship in dirt late model racing and be able to do that with Dunn Benson Motorsports. I would also like to thank Tye Twarog Racing and all my sponsors that have helped me over my career and get me to this point. With that being said I hope all my current sponsors and the people that support me will continue to as I move over to Dunn Benson Motorsports and chase a Lucas Oil Late Model Dirt Series Championship. I’m excited and can’t wait to get started at GA-FL Speedweeks”, stated Devin Moran

The Dunn Benson Motorsports Racecar will be unveiled at the Performance Racing Industry (PRI) Trade Show in Indianapolis, IN on December 8th in the TIGER Rear End Booth #2045. Devin Moran will be at the booth both Thursday and Friday. Special Thanks to Gerald Williams at Tiger Rear Ends for having our car in his booth for the PRI Show. Be sure and stop by and see his new products for 2019.

For all the latest news, schedule, pictures, sponsors, crew or anything related to Dunn Benson Motorsports visit our Team website at www.DunnBensonMotorsports.com and make sure to “Like” our Facebook page as well.