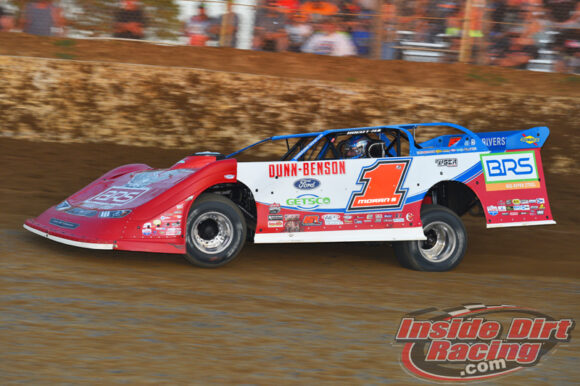 The Dunn-Benson Motorsports Late Model is available for lease

The question of what will happen with one team that competed on the Lucas Oil Late Model Dirt Series last year and appeared to be heading in a new direction after parting ways with its driver has now been answered.

After preparing Dirt Late Model race cars for the likes of Earl Pearson, Jr., Bobby Pierce and Devin Moran over the past several years, North Carolina-based Dunn-Benson Motorsports is now set to go in a different direction with their racing program. According to a release on the team’s Facebook page, owner Kemp Lamm will be offering his organization’s Rocket Chassis equipment for lease to Late Model drivers for the upcoming 2020 season.

According to the release, the cars will be equipped with Pro Power Engines or Battenbilt Engines. The machines will be prepared “by a professional race team led by crew chief Danny Myers”.

This move appears to be similar to that of some NASCAR operations who lease rides to drivers who want to compete in that form of motorsports.

The release states that there are a limited number of spots available for the coming campaign.

Here is the full text of the release:

Coming soon to the late model dirt world, Kemp Lamm, owner of Dunn-Benson Motorsports is excited to announce there will be a new opportunity for young, old and seasoned drivers. They will be given the chance to drive first-class late models prepared by our professional race team, led by well known crew chief, Danny Myers. Kemp will be taking our sport to another dimension through a new leasing program available to super late model and late model drivers. Cars will be provided by the multi-championship winning car builder, Rocket Chassis. Engines will be furnished by Pro Power Racing Engines and Battenbilt Racing Engines. Limited spots available. Email resumes to kemplamm44@gmail.com. PM us with any questions.