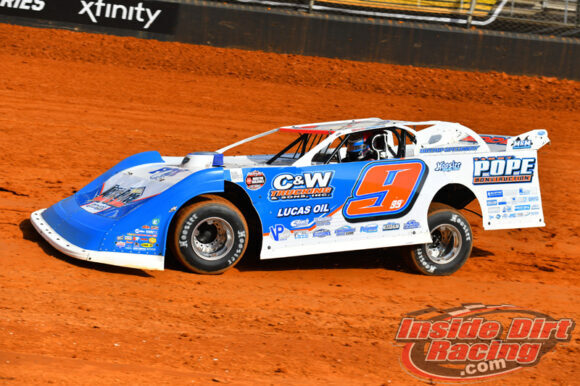 The Lucas Oil Late Model Dirt Series kicked off its 2022 season on Thursday night in Brunswick, Georgia with a bang. In the first of a three-day weekend, it was Devin Moran who struck gold at the Golden Isles Speedway by scoring the win. After a fast paced night of racing, the Longhorn Chassis driver from Dresden, Ohio earned $10,000 for his efforts.

Ricky Thornton Jr. was fastest in Group A qualifying with a time of 15.037 seconds around the 4/10 mile clay oval besting Tyler Erb, Daulton Wilson, Tim McCreadie and Ashton Winger.

Kyle Larson was quickest in Group B time-trials after touring the speedway in 15.008 seconds beating out Devin Moran, Brandon Sheppard, Garrett Smith and Ryan Gustin.

There was, however, more to the qualifying story than simply who was fastest. The LOLMDS is, for the first time, using the so-called droop rule as part of a unified set of rules among both longstanding national series as well as several regional tours. Brandon Overton had initially been clocked as the fastest in Group A and Earl Pearson Jr. had timed in third in Group B. Both cars failed post-qualifying technical inspection as those machines were found to be outside the allowed tolerances for that regulation and both times were negated.

Ricky Thornton Jr. won the first heat race of the night topping Tim McCreadie and Mark Whitener then Tyler Erb was flagged as the victor in the second preliminary ahead of Jonathan Davenport and Ashton Winger.

Kyle Larson outran Tyler Bruening and Kyle Bronson to claim the fourth heat of the night just before Devin Moran won out in the fifth heat outrunning Ryan Gustin and Brian Shirley.

Brandon Sheppard came home the winner in the sixth heat over Mike Marlar and Cody Overton.

Chris Madden and Garrett Smith won the two B-main races used to set the remainder of the starting grid for the main event.

At the start of the 40-lap feature it was Larson who shot to the early lead with Erb, Thornton, Moran and Wilson in tow. Larson looked as if he might pull away from the pack in the early going while, further back, Sheppard was taking fifth away from Wilson.

Larson began to encounter slower traffic by lap 6 which allowed his pursuers to make gains. Two circuits later, Erb slipped by the NASCAR Cup Series champion to wrest the lead away as they raced among slower cars. However, a lap 8 caution for a flat tire on the Shirley machine briefly slowed the action.

On the lap 8 restart, both Thronton and Moran were able to get by Larson to assume second and third in the running order. The intensity level at the back of the top-5 rose when Sheppard entered the fray and went three-wide with Thornton and Moran as that trio fought for positions 2-4 with Sheppard ultimately taking the runner-up position.

The World of Outlaws Morton Buildings Late Model Series champion was not content to ride in second. On lap 13 he powered by Erb to grab the lead of the race. One lap later, Moran also got around Erb to climb to second.

Moran then began his own charge as he went after Sheppard and ultimately roared by to place his name at the top of the leader board on lap 18. Behind the fight for the lead, Larson went about the business of regaining the positions he had lost earlier. On lap 20 he passed Thornton for fourth then on lap 21 get moved around Erb for third.

Following a lap 29 restart, Larson moved in to challenge Sheppard for second but the No. 1 machine would hold of the advances of the No. 6. But in the end, it was Devin Moran who would sail under the checkered flag for the win. 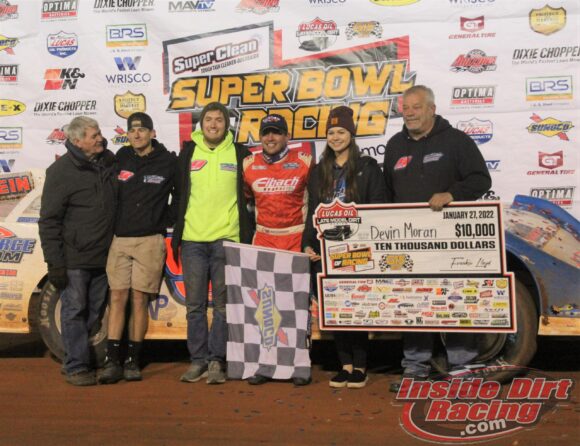 Devin Moran and his crew celebrating in victory lane