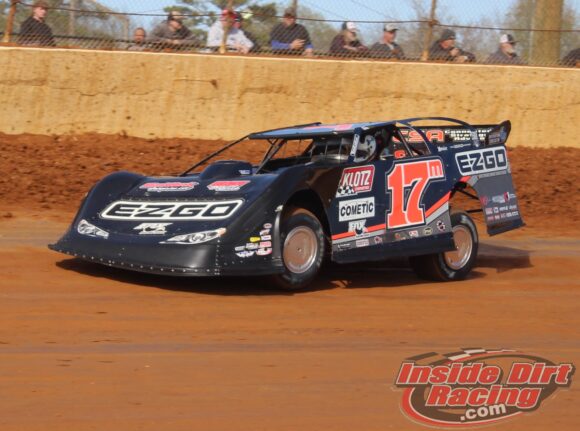 Dale McDowell led all the way at Boyd’s

Dale McDowell is no stranger to victory lane in the race known as The Gobbler. Whether held at its old location at the Cleveland Speedway or its current home at Boyd’s Speedway, the veteran driver has now claimed five wins in the race traditionally held on the weekend preceding the Thanksgiving holiday. The 34th version of this historic race was sanctioned by the Valvoline Iron-Man Late Model Series.

The Team Zero Race Cars driver from Chickamauga, Georgia earned $10,000 for his efforts on the track located in Ringgold, Georgia.

A total of 35 cars were signed in for competition

Feature Re-cap: McDowell bolted to the lead immediately at the start of the 40-lap feature with Chilton, Seawright, McCarter and Cook in his tire tracks. McCarter moved forward quickly when he passed by Seawright to grab third on the second circuit.

McCarter continued to move forward on the third lap when he took second away from Chilton. All the while, McDowell had begun to slip away from the pack but the leader soon found himself working through slower traffic.

A lap 11 restacked the field. Hedgecock took advantage of the restart by jumping into the top-5. Just behind, Seawright, Cook and Bailes were in the midst of a three-wide fight for positions 6-8. Hedgecock moved further into the top-5 by taking third from Chilton on lap 17.

After the feature crossed the halfway mark, McDowell continued to lead but once again had to battle with slower traffic. McCarter and Hedgecock took advantage and closed in on the race leader. However, the ‘Mac Daddy’ able to hold the lead while McCarter and Hedgecock battle each other for the runner-up position. At the same time, Michael Page, who was driving the car normally piloted by Dalton Cook, made his way into the top-5.

In the end, though, it would be Dale McDowell who would sail under the checkered flag to claim the win.