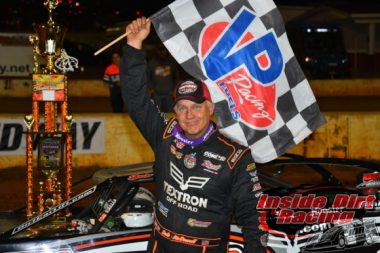 Even for a member of the National Dirt Late Model Hall of Fame the first half of the 2019 season has been a remarkable one for Dale McDowell. The Chickamauga, GA native has already taken home four race winning trophies with two of those victories valued at $10,000. And this weekend the 52-year-old racer heads into a three-race set hoping to solidify his lead in the Spring Nationals mini-series point standings.

McDowell believes that much of the early season success enjoyed by the No. 17m team can be attributed to the work of his brother and team owner Shane McDowell. Following their stint during Florida-Georgia SpeedWeeks back in February, the veteran driver says that his brother found a combination for their Sweet-Bloomquist Race Car in their Mooresburg, TN shop that has proven to be winning one.

“We didn’t run as well in Florida as we hoped to but we were top-10 every night that we finished, I think, so we were right there,” Dale McDowell explained in an interview with InsideDirtRacing.com. “But right after we got back from Florida Shane got to working on some stuff and tweaking here and tuning there a little bit and he put some speed in the car and it’s actually been really good. It’s never ending, though, things may kind of go your way when you’re in the right heat race, and in the right row in the heat race, and then the right row of the feature. Things just have to line up but we’ve had a little bit of luck on our side too. The car’s been good and we’ll take it as long as we can ride that wave.” 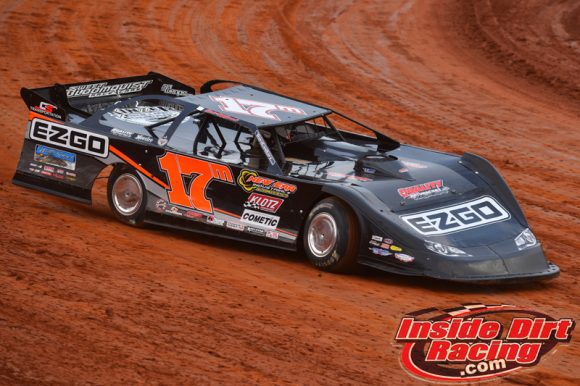 One thing that has interfered with the riding of that wave is the fact that weather has forced the postponement of multiple races the Shane McDowell Racing team had planned on entering. However, the driver points out that there could be some positives to come out of the unplanned breaks in the schedule.

“It’s a little bit frustrating because you want to go race,” McDowell admitted. “We try to go race somewhere every weekend, although we’ll miss a week here and there, but when you miss a month it gets to where you feel like you’re in the winter break. But actually, Shane’s been working on some stuff so I think when we get rolling we’ll be okay. All the equipment is fresh and that’s a big part of it because he’s had time to work on that part of it.”

Often times the SMR crew is looked at as one with a strong chance of ruining the plans of the national touring teams when they race against each other. McDowell has frequently won races in which the No. 17m has gone head-to-head with the likes of Bloomquist, Davenport, Owens, Sheppard, and others. According to the team’s veteran pilot, the type of schedule they employ offers not only flexibility but also the ability to find more speed.

“It’s got its advantages and disadvantages,” the ‘Mac Daddy’ stated. “I feel like the advantage side of it is that when we pick and choose the races we’re going to run our stuff is really well prepared. While they’re out there hitting the grind sometimes they may fall behind a little bit because they can’t try as much stuff. But on the other side, they race so much that they can try a little bit here and there and gain a lot of knowledge at once. 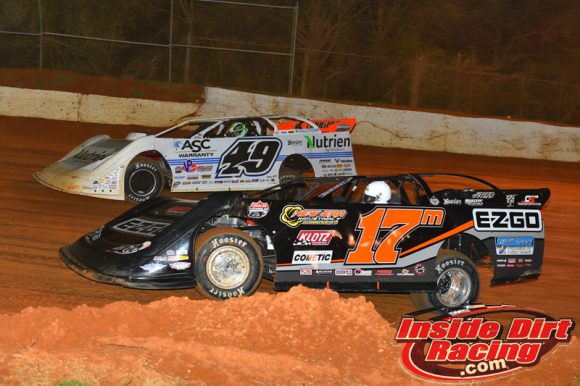 “There’s kind of a balance there when you get out there and get going but in today’s world you can dial yourself out as fast as you can dial yourself in,” he added. “It’s been working for us and Shane’s schedule is busy with cars that he’s doing up there for customers and in his deal with Ahnna Parkhurst. We just kind of work our race schedule around that and race when we can. We’re just going to continue down that same path and see what we can put together.”

The former winner of big events such as the Dirt Late Model Dream and the World 100 says that in the latter years of his career he has come to value each win and each solid performance more and more. And in the heat of the battle for the Spring Nationals title, McDowell would relish the opportunity to collect another trophy of that sort as well.

“I certainly do value wins more these days because the competition level is tough,” the Hall of Fame member declared. “It’s as tough as it’s ever been and you can see that in all the different series and different race programs because there’s different winners. I’m not quitting tomorrow, but you get to looking down the road and when we leave these race tracks I catch myself trying to figure out how many more times I’m going to be at this race. When I was 30 I would be like ‘wait till next year’ and now you’re counting those years so it’s a little different. But I do value each win and I’m very appreciative of them.”

Holding a slim lead in the Spring Nationals standings over Donald McIntosh and Ashton Winger coming into a weekend that will feature three contests over the course of three nights, McDowell’s experience has taught him that the race is far from over.

Read more about the coming weekend for the Spring Nationals by clicking here.

“Used to we would set goals but these days I know there are so many things that can happen and there’s so many different ingredients that have to go together to have a successful night so I just take it race by race,” he insisted. “There’s no sense in getting excited because we’ve fell out of races where we were running well and been running bad and fell out of some. There’s just so many things that can happen so we just take it each day at a time. That’s the least stressful way, anyway.”