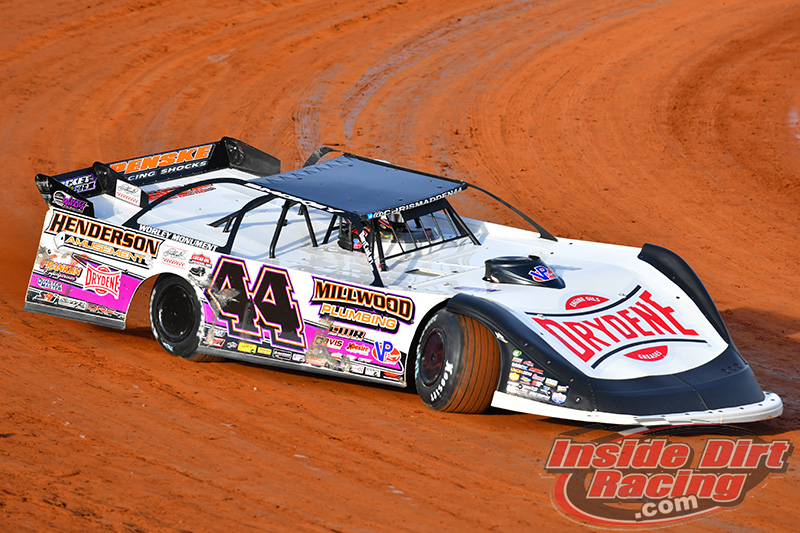 One of the most dominant Dirt Late Model drivers in the country remained as such on Friday night at Smoky Mountain Speedway on the first night of the Mountain Moonshine Classic. Chris Madden dominated the feature set aside for those competitors who were place in the first of two groups that would serve as preliminaries for Saturday night’s Lucas Oil Late Model Dirt Series-sanctioned $50,000-to-win main event.

The Rocket Chassis driver from Gray Court, SC earned $5,000 for his efforts at the Maryville, Tennessee track.

A total of 45 cars were signed in for competition in the A & B Groups combined.

Results from the Group A and Group B features will be used to set the heat race lineups for Saturday’s $50,000 main event.

Feature Re-cap: at the start of the 30-lap feature Madden went immediately to the front with Thornton, Marlar, O’Neal and Bronson in his tire tracks. Bronson took fourth away from O’Neal on the second lap then Overton came roaring up 7th starting position to pass both O’Neal and Bronson to move into third.

By lap 10, Madden was maintaining a relatively comfortable advantage over Thornton, Marlar, Bronson and Overton. However, Marlar would take second away from Thornton on lap 13 while McDowell rose to fourth by passing Bronson on lap 14.

A single yellow flag would disrupt the race on lap 28 setting up a two lap dash to the finish. Madden held on to the lead and eventually sailed under the checkered flag to score the victory.