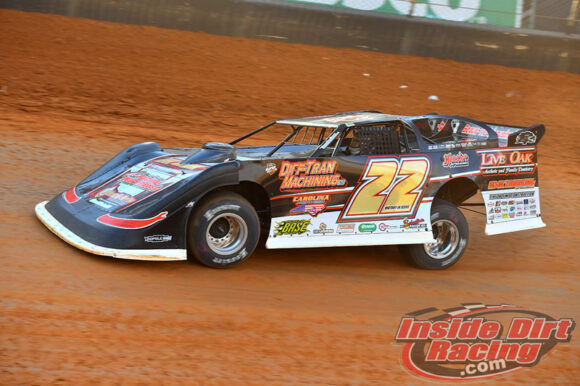 Chris Ferguson won a $10,000 feature at Bristol Motor Speedway in 2021 but came up short the next night in the more lucrative race. But on Saturday night in the Karl Kustoms Bristol Dirt Nationals the driver who had recently lost out on a big victory at Cherokee Speedway came through to claim the biggest win of his career.

It was the second night of competition at the iconic Bristol Motor Speedway with two more coming up next weekend. The Team Zero Race Cars driver from Mt. Holly, NC earned $50,000 for his efforts.

Feature Re-cap: When the green flag waved over the 50-lap feature it was Weiss who went to the early lead with Ferguson, Owens, Bloomquist and McCreadie trailing. Weiss pulled away in the early laps but Ferguson reeled him back in by lap 5.

Weiss found himself trapped behind the slowing car of Pearson on lap 8 which allowed Ferguson to get by for the race lead. Owens then closed on Weiss and looked to grab second but a caution flag waved on lap 10 when fifth-running McCreadie made hard contact with the outside wall.

Davenport broke into the top-5 after the caution as the top-4 of Ferguson, Weiss, Owens and Bloomquist rain in single-file formation around the half-mile. However, Owens appeared to have a flat tire go down which sent him into the outside wall to bring out a caution on lap 21.

On the lap 21 restart, Bloomquist jumped to second behind Ferguson until another yellow flag waved on lap 24 for a crash involving Garrett Smith.

Following the restart on what proved to be the final caution of the night, Ferguson fought off a challenge from Bloomquist with 15 circuits remaining then established control of the race. Davenport also moved into the top-5 after passing by Thornton. after that, the race settled into a rhythm.

Ferguson maintained a relatively comfortable advantage over the final laps until cruising under the checkered flag to claim his second win at Bristol Motor Speedway.