These updates are brought to you by Smoky Mountain Speedway in Maryville, Tenn. The next race scheduled for SMS will be dual $5,000-to-win ‘Rockin With the Stars’ features for the Southern All-Stars Dirt Late Model Series and the Steel Block Bandits Late Model Series on April 23rd. Also, be sure to make plans now to attend the $50,000-to-win Lucas Oil Late Model Dirt Series event on the weekend of June 17-18, 2022.

Weather Forecast: Cloudy and windy with daytime highs in the 50s and nighttime lows in the 30s.

Pre-race Notes: This will be the second XR Super Series race of 2022

This will be the second of four XR Super Series races at Bristol Motor Speedway with the overall points champion from those four races earning $100,000.

4:10- Developing story as all drivers were called to the media center for an impromptu meeting. Media not allowed to attend but it is apparently over an issue with spoilers.

4:30- A series official stated that there was a “Rules meeting that needed to remain private.”

Heat Race Results: There will be four heat races with the top-4 transferring to the feature.

*Weiss drove away from the field.

*Owens took the lead on the lap 2 restart.

Overton tried to get under Knuckles for the lead on the second lap but his car slid up the track. Clanton then got into the left front of Overton which did some damage to the No. 76 bringing out a caution.

*Boles slipped up the track early on while leading and eventually spun.

*Bloomquist led all the way

Lap 10 caution for hard wall contact by McCreadie. Ferguson passed Weiss for the lead on lap 8 as they worked traffic. Owens, Bloomquist, Thornton, Davenport, Lanigan, Clanton, McDowell and Knuckles round out the top-10.

McCreadie appears to be okay.

Lap 21 caution for the third-running Owens makes hard contact with the wall but he is okay. He appeared to have a flat tire to cause the incident. Suddenly Whitener has a problem as his car is stopped with damage on the front stretch. 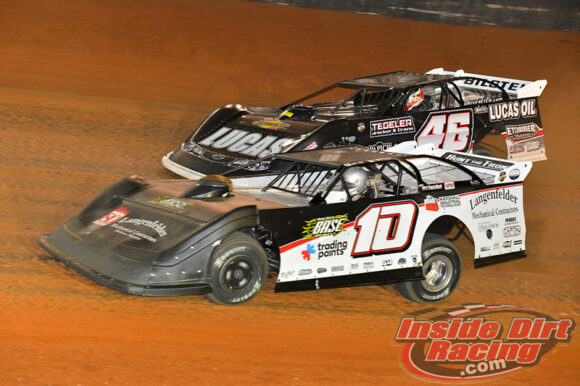 Joseph Joiner and Earl Pearson Jr. will be among those racing for $50,000