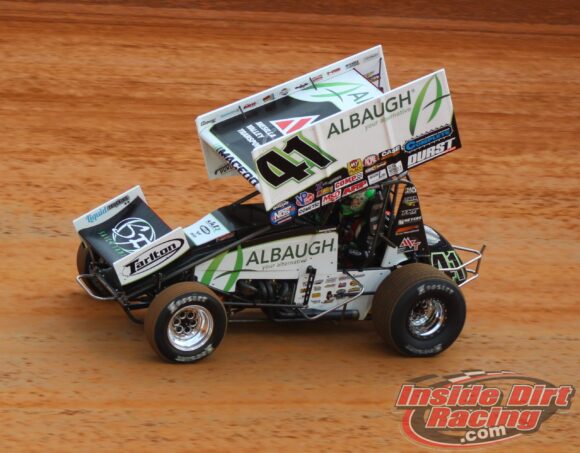 ELMA, WA – September 5, 2022 – After qualifying 13th at Grays Harbor Raceway, Carson Macedo rolled out to start fifth in his Heat Race and his Vegas odds quickly dropped. However, if there is anything that America loves on the opening weekend of College Football, it’s a good comeback; Carson Macedo offered just that in Monday’s Labor Day Spectacular.

Driving from fifth-to-first in seven laps during Heat One, Macedo passed the likes of Brad Sweet and James McFaddento put his Jason Johnson Racing, Albaugh #41 in a crucial redraw position. From there, he took care of business with a DIRTVision Fast Pass Dash win and then led wire-to-wire for his 11th World of Outlaws NOS Energy Drink Sprint Car Series win of 2022.

His come-from-behind rally makes Macedo only the second driver this year to win a Feature after starting row three in the Heat Race. He went fifth-to-first to join Kyle Larson, who qualified 22nd and advanced from sixth-to-second in his Heat before ultimately winning at Tulare (CA) Thunderbowl in March. Those two, plus David Gravel at Volusia (FL) Speedway Park, are the only drivers this year to win after qualifying outside the top-10.

It was never a matter of being down and out, but a matter of how bad this team was willing to work their way out of a hole. They quickly proved they were up for the task and thought of that iconic quote from the team’s namesake, Jason Johnson – “S**T, I WANTED TO WIN.”

“I was pretty let down after qualifying because we executed really well for when we out, but we just got buried as the track fell off,” Macedo mentioned. “Starting fifth and winning your Heat is usually unheard of these days against this kind of field. The minute we got behind the eight-ball, these guys stepped up. I can’t say enough about this car and the work that Philip [Dietz], Clyde [Knipp], and Nate [Repetz] do.”

Leading from flag to flag in the 30-lap Feature, Macedo was forced to fend off early attacks from Brad Sweet, a middle-stage surge from Jacob Allen, and a late-race run from David Gravel. The 26-year-old welcomed every challenge and sent them all packing as he claimed his 28th career win with The Greatest Show on Dirt, placing him 23rd on the All-Time Win List.

“I was pretty nervous, honestly,” Macedo explained. “I don’t think I’ve ever run a race that patient before and actually won it. I thought I would try and detour from my plan because I felt unsure at times, but I’m glad I stayed down. I’ve been moving around recently while out front and it has got me in trouble. I wanted to make them drive around me if anything.”

Advancing from eighth to second and offering a last-minute bid for the win was David Gravel aboard the Big Game Motorsports, Huset’s Speedway, Billion Automotive #2. The current championship runner-up drove by Schatz, then Sweet, then Allen as he found himself hunting down Macedo over the closing circuits. Working a lane lower than the #41, Gravel made his way to the rear bumper but ultimately fell short of a seventh win by 0.557-seconds.

“I was staying lower down the straightaways and gaining a ton of grip that way,” Gravel noted. “We had a great car, I just didn’t get there in time. I was super comfortable on the bottom and knew I was making ground on him. That was a pretty good rebound considering how much we struggled in the Heat Race. We definitely got it right in the Feature.”

Rounding out the podium with another noteworthy performance was Jacob Allen in third aboard the Shark Racing, Pells Tire Service, Low-E Insulation #1A. The Hanover, PA native earned a career-best finish at Grays Harbor, extended his career-best streak of nine consecutive top-10 finishes, and padded his career-best numbers with an eighth podium finish of the season.

“I started to try the middle when I got stuck on the outside, but the track felt too dirty on the exit,” Allen added. “I tried to clean it off and maybe find some rubber, but it never worked out. I’m glad that I was trying stuff because I wouldn’t have passed him if I didn’t move around. It always feels good to be on the podium against the Outlaws.”

UP NEXT (Thur-Sat) – The World of Outlaws NOS Energy Drink Sprint Car Series now heads south for the first of two weeks in California. It all begins on Thursday-Saturday, September 8-10 with the famed 68th Gold Cup Race of Champions at Silver Dollar Speedway in Chico, CA. Fans can BUY TICKETS HERE, or watch every lap LIVE on DIRTVision.