Can Rocket combat Longhorn’s Vado dominance this weekend at Volusia?

During the six-race stretch that made up the Rio Grande Waste Services Wild West Shootout there was little doubt that Longhorn Chassis was the dominant player among the chassis companies. That Dirt Late Model car builder swept the feature races and was almost as impressive in preliminary action. But a look at the roster of drivers and teams could have served as a predictor that such dominance would be the case as most of the top stars were employing the North Carolina-based brand.

As a matter of fact, the chassis brands that came closest to challenging Longhorn at New Mexico’s Vado Speedway Park were the lone Sniper Chassis of Ricky Weiss and Garrett Alberson in one of the few Black Diamond Race Cars on the property.

Beginning this weekend with season opening World of Outlaws CASE Construction Late Model Series-sanctioned Sunshine Nationals at the Volusia Speedway Park in Barberville, Florida the other manufacturers will be represented in greater numbers. In particular, Longhorn’s most serious competitor, Rocket Chassis, will be used by some of the sport’s top drivers and teams.

Tyler Erb was the only nationally recognized competitor at Vado in a Rocket while Longhorn was the chassis of choice for the likes of Jonathan Davenport, Bobby Pierce, Mike Marlar, Brandon Sheppard, Kyle Larson and others.

The odds will even up a bit at Volusia.

Defending World of Outlaws champion Dennis Erb Jr., Chris Madden, Kyle Bronson, Ryan Gustin, Brian Shirley, Max Blair and Rocket Chassis house car driver Hudson O’Neal will be piloting the West Virginia-made racers. Scott Bloomquist will make a very rare appearance in something other than his one of his own Team Zero Race Cars when he rolls onto the track in the Big Frog Motorsports Rocket. 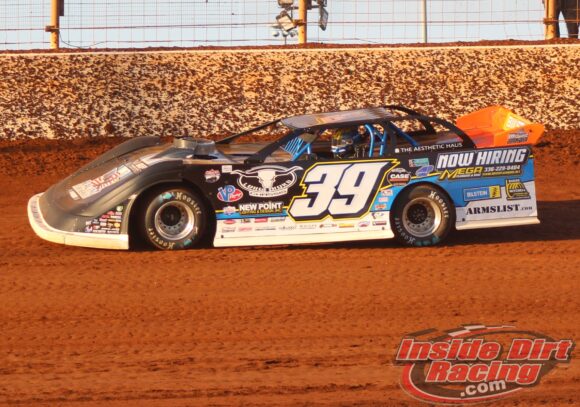 Some of those same drivers from the Wild West Shootout will be on hand for Longhorn. Davenport, Pierce and Sheppard will be there along with Tim McCreadie, Devin Moran, Tanner English, Ricky Thornton Jr. and others who will join in the racing action.

Of course, other brands will be in the mix. Shane Clanton in a Capital Race Car and Cade Dillard in a Black Diamond will lead the “other” brands trying to upend the more prevalent brands.

A long season awaits these stars of the dirt in 2023 and many of those mentioned above will no doubt have their time in the spotlight. And when they do, one of the first things they will mention in the post-race interviews will be the chassis they drive.

Chassis brand competition is fierce in Dirt Late Model racing. Longhorn has gotten off to a strong start in 2023. Now with more cars on track, can Rocket answer the challenge this weekend at Volusia and beyond?