How important is time management in dirt racing?

Richard: Over the past week the subject of time management came up twice in dirt racing. On more than one night during the Wild West Shootout at Vado Speedway Park the Modified classes took up a great deal of time during heat races and B-mains because of spins and crashes. Even the FloRacing broadcast crew were, at times, bemoaning the delay in getting to the Late Model portions of the event.

Let’s be honest, the vast majority of those who tuned in to watch did not do so to watch Modifieds spin out. At the same time, those competitors did pay entry fees and bought pit passes.

That said, there has to be a better solution to setting a starting lineup than preliminary races that drag on. For the support divisions I would suggest taking whatever number from the heat races that would lock in 18 or 20 cars then simply fill in the remainder of the field with the fastest qualifiers not to make it in via the heats.

Another event that drew criticism for time management was the Chili Bowl race for Midget cars. I understand that this is the premier race for this form of motorsports and that there are many entrants. It’s a week long happening culminating on Saturday as drivers work through the alphabet soup on their way to the A-main. But it wasn’t that portion of the morning and afternoon part of the day that drew criticism all over social media.

Once the C-main and B-main races were set to be run there were long breaks for track prep as well as ceremonial speeches, acknowledgements, and driver introductions. It was well past midnight in the eastern time zone before the feature race finally got underway.

Even dedicated race reporters admitted on Twitter that they were unable to stay awake for the main event. Because of the notoriety of the Chili Bowl and the chatter on social media, there were many race fans who don’t follow dirt racing closely who were watching. There was an opportunity to gain new fans.

But instead of gaining new fans, many now have the perception that dirt racing is an activity that drags its shows on unnecessarily long. Dirt racing has to do better if it is to grow beyond where it is now.

Michael: I have to admit that I checked out of the Chili Bowl once it became apparent the delay was going to be lengthy before the A-main. I’m not a huge fan of midget racing, so the commitment to keep me tuned in was not there. I’m not sure if I would have stayed with it had it been a late model race.

I understand the frustrations from fans over the non-late model classes taking so much time. The thing I come back to is those drivers also spend a lot of time to get ready to race and they pay their pit passes and entries fees too. Treating them like second-class competitors is not the way to go. However, I do think there are ways to make the programs flow a little better.

What off-season news from east Tennessee tracks has gotten your attention?

Richard: I have been watching what has been going on at I-75 Raceway. Not long ago, the property was listed for sale and now a number of big events have been scheduled. The World of Outlaws CASE Construction Late Model Series will be coming to the Sweetwater, Tennessee facility in October.

The Southern All Stars, Spring Nationals, Southern Nationals and the American All-Star Series are among those scheduled. And this is one of the few tracks that still has a significant number of support classes as other tracks are reducing those races.

This is a track that seems to be in transition.

Michael: For me, it’s the changes made to Smoky Mountain Speedway. I remember seeing races there when it was a half-mile asphalt track. I’ve seen races there under every configuration. Shortening the track from just over 4/10-mile to a true 3/8-mile layout is something many fans and competitors have been asking for. But there are a lot of traditionalists that do not like this move. Making this change is somewhat of a gamble for owner Roger Sellers.

It will be an adjustment for a lot of people. The most recent layout has been around since the late 80’s. It’s the biggest change I’ve seen to a racetrack, in this area, that I can remember. 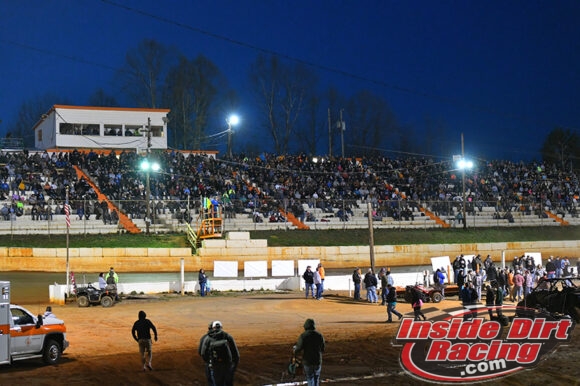 What upcoming events in the east Tennessee region are you looking forward to?

Richard: It has to be the XR Super Series weekend at the Volunteer Speedway, right?

I never thought there would be a $50,000-to-win race in east Tennessee then Smoky Mountain Speedway delivered exactly that last year with their Lucas Oil Late Model Dirt Series show (which they will again in 2023). And now, there is going to be a $100,000 payday for the winner of the feature at Bulls Gap in March.

With this not being sanctioned by either of the two traditional tours, I am really anxious to see what the car count will be and how many fans will show up.

Michael: I guess since I am also interested in the promotional side of the sport as well as the competitive side, the XR race at Volunteer is doubly interesting to me. Like you, I’m interested to see which drivers the race will draw. With a purse that large, I would suspect most of the biggest names in the sport will be there.

The other part of me is anxious to see how the purse can be paid without someone going into a big whole. Between sponsorships and pay-per-view packages sold, there is more money to be made aside from the gate money.