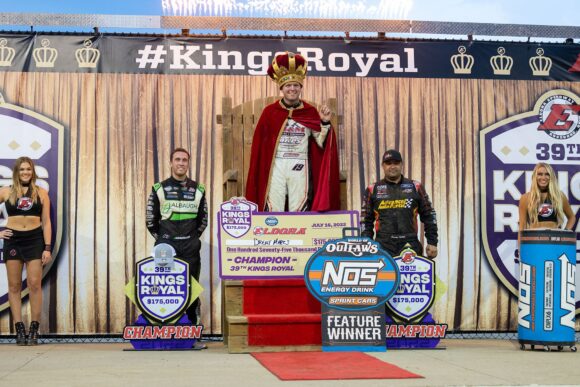 ROSSBURG, OH – July 16, 2022 – Within a span of 48 hours, Brent Marks has altered the course of Sprint Car Racing history not once, but twice.

Topping Thursday’s long-awaited return of the $100,000-to-win Historical Big One, Marks had found his season-defining victory but wasn’t done there. He then came back on Saturday and aced the $175,000-to-win Kings Royal to seal the deal on a week that will never be forgotten.

All told, the Myerstown, PA native left Eldora Speedway with $276,125 following four nights of racing with the World of Outlaws NOS Energy Drink Sprint Car Series. At 31 years old, Marks now owns the richest single week in the history of the sport.

In contrast to Thursday’s HBO triumph from 14th, the Murray-Marks #19 won Saturday’s 40-lap grand finale from the sixth spot. Marks had driven forward to third by Lap 3, worked into second around Kerry Madsen on Lap 8, and then drove by Brian Brown to assume command on Lap 22 of the show. He then held off late charges by Carson Macedo and Donny Schatz to score the biggest win of his life.

“It feels amazing, what an incredible experience from the beginning,” Marks mentioned. “Seeing the reaction from a crowd like we had here and sharing the moment with my family and team means the world to me. I’ve been working really hard to put myself in a position like this and I think we’re getting there.”

In a fitting ceremony, King Jac XV returned to Eldora as the Royal Sovereign and officially crowned him “King Brent the 39th.”

His 13th overall win of the season brings him to four in 2022 with The Greatest Show on Dirt, upping his career total to 12 wins and putting him in a tie alongside Tim Green, Tyler Walker, Don Kreitz Jr., and Brady Bacon for 12th on the All-Time Win List.

The victory makes Marks the seventh driver (Haudenschild, Kinser, Kinser, Blaney, Schatz, Pittman) to score both a Historical Big One and Kings Royal trophy, but he’s now the first in history to sweep both Crown Jewel events at The Big E within a single season, let alone a single week.

“Having my name alongside those guys who have helped build our sport is surreal,” Marks added. “I’ve looked up to those guys my whole career, so to be under the same banner as them means the world to me. That’s a stat nobody can take away from us, we’re the first in history to win both in the same year.”

Amidst a historic campaign, one that ranges from his home state of Pennsylvania all the way to Texas and Iowa, Marks has set his next sights on finishing the triple crown with a Knoxville Raceway crown.

“I’d love to compete for a Knoxville Nationals win, but honestly I would be thrilled with a top-five there,” Marks continued. “I really want to get myself another National Open. I feel like I let that one get away last year and I’m ready to win it back.”

Learning lessons used from Thursday’s Historical Big One, Marks slowly picked his way through the field to open up Saturday’s 40-lapper. King Kerry XXXI, Kerry Madsen, led the opening seven laps aboard the Toyota Racing Development, Roth Motorsports #83JR, while Brian Brown took away the lead on Lap 8 and held it for another 12 circuits.

With Madsen and Brown disposed of, attention turned to Carson Macedo’s Jason Johnson Racing #41 and Donny Schatz’s Tony Stewart/Curb-Agajanain Racing #15. Both made late charges at Marks for the top prize but could do nothing in actually passing the #19.

Falling short of his sixth Kings Royal crown by 2.399-seconds, Donny Schatz narrowly missed out on Saturday’s big win. The Ford Performance, Advance Auto Parts #15 was outstanding in the late running, coming to life on the final restart with nine to go. The 10-time World of Outlaws champion hustled into second by Lap 32/40 and almost took the race lead away before fading to accept a runner-up in his 27th consecutive Kings Royal A-Main start.

“The strides we’ve made with the Ford have been incredible lately,” Schatz admitted. “To be competing at the end, where we’ve struggled lately, I think is a great sign for this team. We’ll keep building on this and hope to get another World of Outlaws win soon.”

After making a late run on Marks on the high side, Macedo had cut into the gap and made it interesting down the stretch. He was running second and catching the #19 throughout lap traffic with eight to go, but the final restart was doomed as Schatz drove by Macedo and shuffled him out of the picture.”

“I felt like I was catching Brent up on the top, but I definitely didn’t need that caution,” Macedo said. “I didn’t know what to do on that restart and I was just perplexed. Getting that close to this big of a win is for sure a letdown. My guys did an incredible job from where the day began after transferring from the Non-Qualifier.”

UP NEXT (Wed-Sat) – The World of Outlaws NOS Energy Drink Sprint Car Series heads east and reignites the PA Posse rivalry with stops at Port Royal Speedway on Wednesday, and then Williams Grove Speedway on Friday & Saturday. Fans can BUY TICKETS HERE, or watch every lap LIVE on DIRTVision.