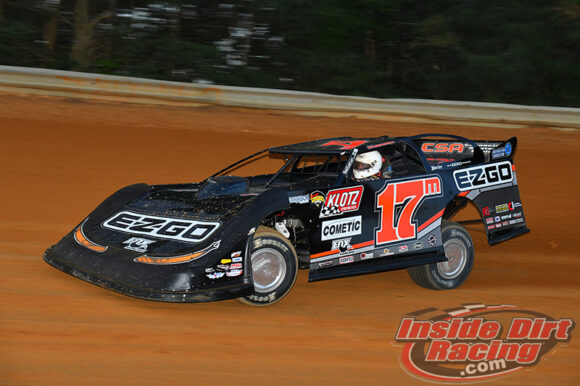 Dale McDowell took over on lap 36

Dale McDowell demonstrated the value of experience on Saturday night at the Wythe Raceway as he held back until the right moment then charged to the race lead and on to the win in the second race for the Schaeffer’s Oil Southern Nationals Series.

The Team Zero Race Cars driver from Chickamauga, Georgia earned $10,053 for his efforts on the half-mile track located in Rural Retreat, Virginia.

A total of 22 cars were signed in for competition

Feature Re-cap: Hill rushed to the lead at the start of the 53-lap main event followed by Ferguson, Brown, Roland and Ford. However, disaster struck Ferguson just after the completion of the first lap when he slowed to bring out a caution and ultimately retired from the race.

Ford made a move to third on the lap 1 restart as Hill continued to lead Brown. Further back, Marlar got by Roland for fourth on the second circuit. But once again, disaster struck for one of the front runners as Ford suffered damage to the nose of his car and slowed to bring out a caution which left Hill leading Brown, Marlar Roland and Hedgecock.

Just after that restart, Hedgecock got by Roland for fourth then McDowell entered the top-5 for the first time by also passing Roland. Hedgecock continued to climb as he moved around Marlar for third on lap 6. McDowell again followed suit as he took fourth away from Marlar on lap 9.

At the front of the field, the top-3 cars of Hill, Brown and Hedgecock roared around the track in tight formation while McDowell cruised a few car lengths behind.

A lap 17 caution for Martin set up another restart opportunity which Hedgecock took advantage of by passing Brown for second. By lap 25, Hedgecock had closed to the rear spoiler of Hill’s car while McDowell took third from Brown.

On lap 29, Hedgecock made his move and went to the race lead by passing Hill. McDowell once again charged through the open door and passed Hill for second. At that point, McDowell began stalking Hedgecock for the lead with those efforts paying off on lap 36 when the veteran driver wrested the lead away from Hedgecock.

A lap 43 caution for Collins set up one final restart but McDowell was able to fend off any and all challenges then pull away from his pursuers to claim the race win.