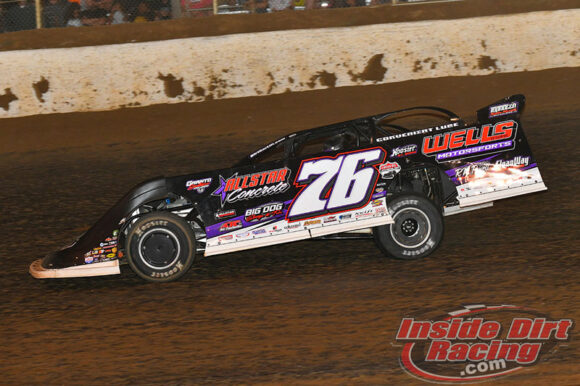 Brandon Overton picked up his second National 100 win at EAMS

Brandon Overton did not have it easy on Saturday night in the 48th annual National 100 at East Alabama Motor Speedway by overcoming some early troubles then driving on the victory in one of Dirt Late Model racing’s most historic events.

The Longhorn Chassis driver from Evans, Georgia collected $30,000 for his efforts on the Phenix City, Alabama track in a race shown live by FloRacing.com.

The starting lineup for the main event was set from qualifying and heat racing that was completed on Friday night.

Feature Re-cap: The initial start saw Overton slide up the track forcing Horton off the track to cause a complete restart. On the second attempt to start, Horton again fell back as Overton took the early lead ahead of Joiner, Herrington, Tyler Erb and Bailes until a lap 2 caution slowed the action.

On the restart, Herrington rose to second with Cody Overton, Tyler Erb and Bailes trailing Brandon Overton. Cody Overton moved into second behind his brother on lap 8 and then overtook the No. 76 for the lead two circuits later.

A lap 12 caution for Martin then regrouped the field. Jimmy Owens, driving a car owned by Larry Harrod, entered the top-5 on the lap 12 restart just before another yellow flag waved on lap 14. The front runners at that time consisted of Cody Overton, Brandon Overton, Tyler Erb, Jimmy Owens and Wil Herrington.

Erb passed Brandon Overton for the runner-up position on the lap 14 restart.

Brandon Overton slid off the track and came to a stop with a flat tire to bring out a caution on lap 21. Owens bolted to second on the restart and set out after Cody Overton until a lap 24 caution came out for debris on lap 24.

Fifth running Herrington spun on the lap 24 restart to cause another yellow flag. Cody Overton kept the lead on the restart while Erb and Owens fought over second.

Cody Overton puled out to a lead of more than three seconds in the laps that took the the race passed the one-third mark. However, Erb closed in on Overton as the leader caught up the tail of the field but a lap 39 caution erased that advantage.

By lap 41, Brandon Overton re-entered the top-5 recovering from his earlier issues. At the halfway point of the race, the Overton brothers again ran first and second with Cody ahead of Brandon. Then on lap 54, Brandon took the top spot away from Cody.

The Overtons ran in tight formation for the next several laps while putting distance between themselves and Erb, Herrington and Seawright.

A lap 76 caution for the stalled car of Cook regrouped the field once more. Cody Overton bobbled and faded on the restart allowing Erb, Weaver and Joiner to get by as Brandon Overton continued to show the way.

Overton’s lead over Erb, Joiner and Herrington was taken away when the third-running car of Weaver spun on lap 92. Bailes slowed to bring out a yellow with four laps remaining, setting up a dash to the finish.

Over the closing laps, Overton controlled the pace and drove under the checkered flag to claim his second consecutive National 100 win.