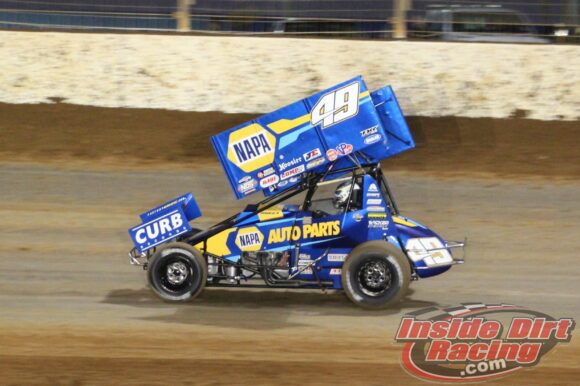 Coming into the Can-Am World Finals held this past weekend at The Dirt Track in Charlotte the World of Outlaws NOS Energy Drink Sprint Car championship was very much in doubt as Brad Sweet entered the two-day event with a very slim lead over Donny Schatz for that prestigious title. Sweet was in search of his first series championship while Schatz already had ten trophies in his collection.

Ultimately, Sweet won out and was crowned as the World of Outlaws Sprint Cars champion by a narrow margin.

While Dirt Late Model racing has many fans, and indeed, this website focuses most of its attention on that form of racing, that close battle served to benefit all of dirt racing and not just the WoO Sprint Cars. A great deal of attention was placed on the action at the Concord, NC facility that might not have been otherwise, and as a result, that almost certainly served the entire sport well.

Consider that the two drivers contesting the WoO Sprint Cars championship are two of the most high-profile drivers in that form of the sport today. Sweet has been a consistent winner for some time now and Schatz has piled up wins and championships at record rates.

Moreover, these two stars drive for the two most high-profile teams in that form of racing as Sweet pilots for Kasey Kahne Racing while Schatz steers the cars prepared by Tony Stewart Racing. 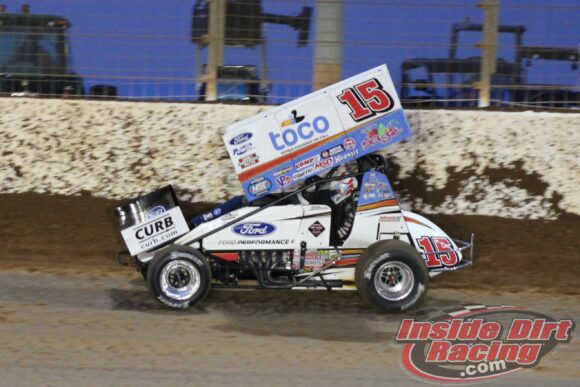 Although Dirt Late Model racing has many fans, it still remains a relatively small fish in the big pond of motorsports. With that said, when many fans of other forms of racing such as NASCAR or IndyCar think of dirt racing, they think of Sprint Cars. That mindset is further added to by the heavy influence of NASCAR personalities such as Kahne, Stewart, Kyle Larson and Ricky Stenhouse, Jr. in the Sprint Car ranks.

So ultimately, the point is that this weekend brought together a perfect storm of factors that would draw the maximum amount of attention to all of dirt racing. Two high-profile drivers who drive for high-profile teams in a close battle for a championship that would play out in the very heart of the NASCAR racing world as The Dirt Track sits almost literally in the shadows of Charlotte Motor Speedway.

And all of that was playing out as the World of Outlaws Late Model Series and the Super DIRTcar Big-Block Modifieds were sharing the stage.

News outlets that might not often cover dirt racing were on hand to report on the final championship weekend. For example, Jordon Bianchi, who writes for the multi-sport subscription-based website TheAthletic.com was in the pit area interviewing drivers and producing stories for a much broader audience than dirt-only publications would ever have the ability to reach.

Bianchi’s article on Sweet’s championship was at the top of TheAthletic.com’s motorsports page even as the race leading into the NASCAR championship finale was also being covered. Whenever any form of dirt racing gets that type of coverage it benefits the sport as a whole.

Fans who might not have otherwise been exposed to this form of racing were given the opportunity to catch a glimpse of the passion and the personalities that make up this form of the sport. Ultimately, some may even be driven to consider going to a dirt track to see the action take place for themselves and in the process will learn more about all of the cars and drivers that regularly race on clay surfaces all over the country.

At times, dirt racing enthusiasts can be very biased toward one form of racing or another. Late Model vs Sprint Cars vs Modifieds are common disagreements and all of those vs NASCAR or IndyCar are even more common. However, anytime new fans can be brought in to any form of dirt racing it will ultimately serve the entire sport well.

This past weekend at The Dirt Track in Charlotte placed many eyes on dirt racing that might not have been there otherwise. And that’s a good thing for all involved.