For the final time of the 2022 season, cars took to the dirt covered Bristol Motor Speedway this past weekend for the World of Outlaws-sanctioned Bristol Bash. While car counts were low for both the CASE Construction Late Models and the NOS Energy Drink Sprint Cars(by design), the grandstands held a very nice turnout of spectators. Was this particular event a success?

Richard: I would definitely say that this event was a success. Many naysayers will point to the number of empty seats in the stadium with a capacity of 160,000 and say something like “There was nobody there” but as a couple of other media members and myself noted, the number of people there would have absolutely packed just about any other dirt racing venue in the country with the exceptions of Eldora and Knoxville. So from the standpoint of attendance, it was a good deal.

No doubt, one advantage these races had over the XR Super Series-sanctioned Karl Kustoms Bristol Dirt Nationals was the fact that the top Sprint Car drivers were on hand to put on a show. Further, Late Model stars such as Jonathan Davenport, Chris Madden, Jimmy Owens and Ricky Weiss were in competition. And of course, knowing that defending NASCAR Cup Series champion Kyle Larson would be racing in both divisions certainly did not hurt.

But probably what may have help the Bristol Bash most was the weather. Unlike the Dirt Nationals, it was warm all weekend with no chance for rain. Apparently dirt is going back on Bristol Motor Speedway next year but it is not yet known what exactly will happen other than the NASCAR races. Both Weiss and Davenport made it very clear in the Media Center on Saturday night that they hope to be back there in 2023, and if the top competitors want to come back, that may be the most clear sign of all that the event was a success.

Michael: The crowd on Saturday was really good. It’s hard to gauge how many people were there because people were seated in the front stretch seats all the way into the turn 1 seats. If I had to guess, it looked like 15,000 up 20,000 people were there. There were quite a few people that bought pit passes to go into the infield as well. There were a lot of people on top of the building in turn 4.

It really is hard to say whether the World of Outlaws will be back at Bristol next year. The Sprint Cars put on two good shows. Both Late Model races were pretty good, but the low car count in the Late Models had to be somewhat disappointing. There have been a number of drivers express their displeasure with racing at Bristol because of the toll on equipment and how the cars get so spread out.

Continuing with the theme of the Bristol Bash, it seemed fitting that Ricky Weiss was able to win on Saturday. Considering how well he has run at BMS, it felt like the Canadian deserved to pick up at least one feature win, didn’t it?

Richard: Ricky Weiss has run at or near the front in seemingly every Late Model race that has been held in Bristol. And while he had some fast time awards, heat race wins, and feature podiums, he had not been able to collect one of those very cool swords BMS awards its winners.

Media members are not supposed to root, and I don’t. However, it did in fact seem fitting that the driver of the No. 7w was able to claim a checkered flag. And one thing is for sure, the win was definitely not just handed to him as he had to survive a serious challenge from Chris Madden during the middle stages of Saturday’s feature to earn it.

Weiss had a difficult season in 2021 but it very much looks like he is set to enjoy some success and the fruits of his labor as he continues to develop his own Sniper Chassis. The difficulty will come in trying to carry the momentum from this very unique race track to other locations as the long season plays out. 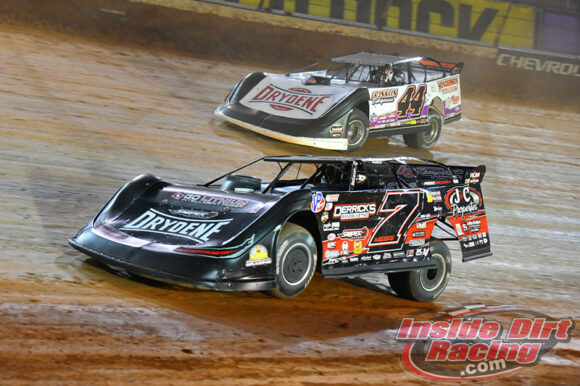 Ricky Weiss(7) and Chris Madden(44) racing for the lead

Michael: I think if one driver deserved to win a race at Bristol was Weiss. As you said, he’s been up front in 3 weeks of racing and just never sealed the deal. When Madden passed him for the lead, I thought another one was slipping away from him. But when passed Madden back to retake the lead, I was waiting for a flat tire or something else to happen. But nothing happened and he got the win.

Turning our attention to east Tennessee, a very ugly scene played out last weekend at the Wartburg Speedway when two drivers tangled during a race and then got out of their cars to fight. From there, a large number of other people joined in the fray. Ultimately, a track official was hit which resulted in that track banning the racer in question for life. Soon, the other tracks in the area lived up to their agreement to cooperate on such matters and also banned that driver. This was an important thing for all the tracks to do, wasn’t it?

Richard: This was absolutely the right thing for Wartburg Speedway to do and it was right for the other tracks to follow suit. There is really no place for fighting at any time but had it all ended with just the two drivers trading a couple of punches then stopping at that point, a disqualification from that night’s race and maybe a week or two suspension would have sufficed.

However, the incident didn’t end there as others felt it was their place to get involved. At that point, the whole thing escalated way out of control. Still, there can be no tolerance for an official to be struck. Drivers are told in pretty much every drivers meeting I have attended(which is a lot) that they are responsible for their own actions as well as those of their crew members. Everyone knows that yet those who got involved simply would not stop, at least from the video I saw.

But most importantly, there would have been little accomplished if only Wartburg Speedway had acted. The other tracks lending their support should add more weight to the matter.

Everyone has done things in the heat of the moment that they regretted later but there has to be a stopping point somewhere, especially among those not directly involved in the initial act.

Michael: I saw a second video of the incident that left me more questions than answers. The other video showed another man coming onto the track and basically diving into where the officials were standing and that’s where things broke loose.

After getting an explanation, the person jumping into the mix was the driver’s father. I don’t know what was said by any of the parties prior to that. But the dad was the chief instigator. I don’t know what the issue was. But we don’t know if that had not happened, would the son started punching the official?

I’m glad nearly all the other tracks followed suit. There is no place for that. If drivers want to fight each other, that’s one thing. Heck, some promoters don’t mind seeing a couple of drivers duke it out. I’m glad the other track owners sent a strong message by saying none of them will tolerate it.

Photos from the WoO Late Models at Bristol Motor Speedway