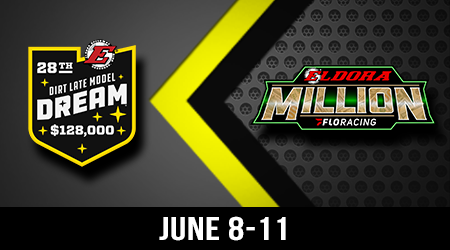 Eldora Speedway has hosted the Dirt Late Model Dream every year since 1994 with two exceptions. The Dream was replaced by the first Eldora Million in 2001 and it had to be scrubbed altogether in 2020 because of the pandemic. But throughout most of that race’s history, it has offered a greater financial reward to its winner than any other annual event on this sport’s schedule. But this year, it won’t even be the highest paying race on its same weekend.

Track owner Tony Stewart and his staff at Eldora brought back the Eldora Million for 2022, but instead of replacing the Dream, they opted to run the two races as companions.

Keeping the Dream in its traditional place on the calendar, the Eldora Million was added as a Thursday night affair. While to some it may seem anti-climactic to have a race that pays $128,000 to its winner following one that offered up $1,002,022 to its champion, the track had likely already sold tickets and made camping reservations for the Dream before the Million was ever announced.

Still, it’s hard not to go into Friday’s preliminary races and Saturday’s main event not feeling like the primary show has already played out.

But drivers, teams, media and fans have to think of it like this- if not for the Eldora Million, the Dirt Late Model Dream would offer the highest payout to a winner of any race this season. While it may seem anti-climactic, the Dream is still a very big deal. It just happens to be following the biggest deal.

Of course, the natural human inclination for anyone other than winner Jonathan Davenport is to feel somewhat let down after such an historic happening as the first $1,000,000 race held for Dirt Late Model race cars in over two decades. A quick turnaround might not be as easy from both a psychological or physical standpoint as it might seem.

Perhaps the driver most affected by a let down is Devin Moran. His father, Donnie, won the first Eldora Million and he very much wanted to carry on his family’s legacy in that race. His third-place finish indicates that he came close to accomplishing that goal.

“Man, I wanted to win this son-of-a-gun so bad,” Moran declared in his post-race interview with FloRacing.com. “It just wasn’t quite there. I just wish we could have restarted second there(on the last restart). I definitely wouldn’t have been quite as nice as Madden, I wanted this one so bad. This is by far the best I’ve ever been here.”

Running the preliminaries and the main event on the same day(Wednesday’s racing had been rained out) took its toll on the Dresden, Ohio native.

“I’m pretty drained at the moment, mentally and physically,” Moran admitted as he looked toward Eldora’s victory lane stage. “I’m just going to get this thing loaded up and go back and get to bed in a little while. It sounds bad, I don’t really feel like racing tomorrow and Saturday. We’ll get it ready and we’ve just got to get rolling again. Maybe we’ll be up there.”

Once hot laps begin on Friday evening for the preliminary races leading into Saturday’s Dirt Late Model Dream, the drivers and teams will realize exactly what they are racing for and the juices will start flowing allowing them to move on from the Dirt Million to the task at hand. And that task will prove to be very beneficial financially to those who do it best.