Tanner English: “I’m just glad to get it done” 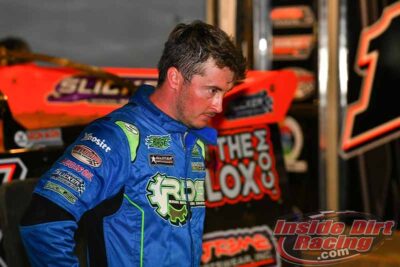 It was one of those things that seemed like it was just bound to happen and on Friday night at the Davenport(IA) Speedway it did. That thing was Benton, Kentucky driver Tanner English notching his first career win on the World of Outlaws CASE Construction Late Model Series. And he did in spectacular fashion by taking the lead on the last lap after battling with two of Dirt Late Model racing’s top young stars in the persons of Bobby Pierce and Devin Moran.

It’s not like English hadn’t won big races before. As a matter of fact, he had already scored two $10,000 triumphs in 2022 with one coming in a DIRTcar Summer Nationals event at Highland(IL) Speedway and another in an unsanctioned affair at the Paducah(KY) International Speedway. But this was his first victory in a feature sanctioned by one of the national tours.

After earning a podium finish on Thursday night in first race of a three-day event billed as the ‘Quad Cities 150’, Friday’s racing action did not get off to the start English was hoping for. After posting the 8th fastest time in Group B qualifying, the 29-year-old driver was unable to transfer to the feature out of his heat race. However, he won the second Last Chance Showdown which placed him in the 18th position on the feature starting grid.

After climbing slowly through the mid-pack, a lap 25 restart provided an opportunity for the No. 81E Longhorn Chassis machine to make a big move. English then found himself just behind the lead battle between Pierce and Moran with just 10 circuits remaining.

As the laps clicked away, English closed in closer and closer to the lead duo. The cars took the white flag three-wide with English on the very bottom while Moran looked to get around Pierce further up the track. The three cars continued their fight for the win throughout the final lap even while having to work around slower cars.

English, hugging the bottom of the race track, was just able to nip Pierce at the finish line to earn the win and a $10,000 payday.

“It’s pretty awesome,” English told DirtVision.com in his post-race interview. “It’s been a long time coming. I’ve tried to get one of these national wins for a long time, been real close but just never got one. To do it like that was pretty awesome. That’s the way I feel like I come through every race, start way back and come up through the field. We made the right call on tires and it just paid off. On that restart, I think I passed six cars in about a lap. It’s pretty awesome. All these fans here, I’m sure they were going crazy. It was a heck of a race there, I think we were three-wide coming to the white(flag).” 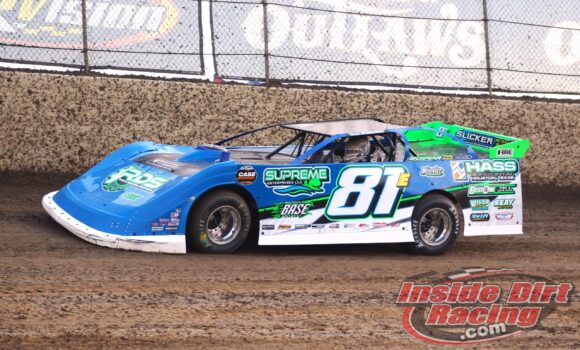 Tanner English in his No. 81E Riggs Motorsports Longhorn

“I think we’ve got a really good shot,” English declared. “To pass Devin and Bobby like that, they’re two of the best here. As long as you’ve got a race track to race on, I think we can come up through there no matter what we do. I was kicking myself in that heat race, I messed up bad. I didn’t make the right calls and just kind of had a bad start. I was really down and out and I changed everything on this car when I got back in the pits and it worked. I ran that B-main and it drove real good.”

Ultimately, English is pleased to have that first WoO Late Models win under his belt.