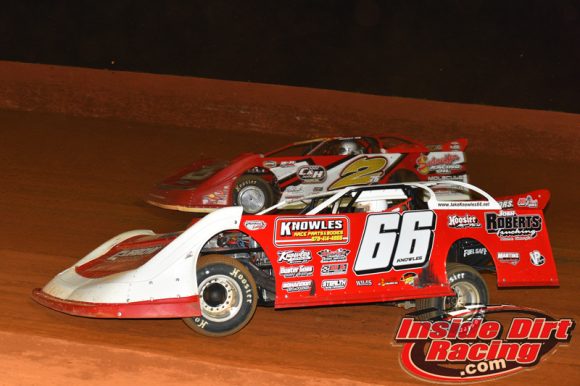 At the beginning of the 2019 Schaeffer’s Oil Southern Nationals it looked as if the 11-race mini-series would be the dominion of Brandon Overton. The Rum Runner Racing driver won two of the first three events and earned a second place finish in the one feature he did not win. However, things have taken a dramatic turn particularly following Tuesday night’s race at Tri-County Race Track.

Jake Knowles scored the win at the Brasstown, NC track and, due to Overton’s 21st place finish, assumed the lead in the series standings in the process. The combination of two poor finishes by Overton along with the consistency of Knowles over the course of the six features completed so far has provided the impetus for the change at the top of the standings.

Knowles leads the series with a total of 1146 points which places him 32 markers ahead of Overton and 40 points in front of third place Donald McIntosh. Three races remain on the series schedule as the tour will move to Tennessee to bring the curtain down on the 2019 campaign.

In 2018 Overton scored a total of five wins out of the nine races contested but the Evans, GA driver lost out in the final series rundown to Casey Roberts due to poor finishes in those races he did not win.

As stated above, Overton looked as if he might dominate the 2019 version of this midsummer series by earning wins at Wythe Raceway and Smoky Mountain Speedway along with a runner-up result at Cherokee Speedway and a fourth place at Rome Speedway. However, two poor finishes have dragged the early leader’s points total down as he could only manage a 16th at Screven Motor Speedway and the previously mentioned 21st at Tri-County.

Knowles on the other hand has been a model of consistency so far in the six contested events. His high water mark has been the victory at Tri-County but his worst finish has only been a seventh in the opening event at Wythe Raceway. He has also mixed in a third and two sixth place efforts to garner the lead in the standings up to this point.

McIntosh has yet to win but the series is moving toward one of his best statistical tracks in the 411 Motor Speedway in Seymour, TN on Friday night. The driver of the No. 7m machine has tallied three top-5 finishes and two additional top-10s over the past week-and-a-half but suffered a 19th at Screven to diminish his chances.

The Southern Nationals doles out 200 points for a win with the second place finisher receiving 196 in each feature event. From there, each competitor’s allotment drops by two points per position. Based on that, a win or two in the remaining races by any of these three drivers would go a long way toward securing a title. However, a finish outside the top-10 could open the door for the other two competitors to pull ahead.

Further, with some luck on their side, fourth and fifth place drivers Tanner English and Cla Knight could still climb into contention.

Three races remain with the series wrapping up in the Volunteer State this weekend. Crossville(TN) Speedway will play host for a $3,500-to-win affair on Thursday night with the drivers and teams then moving to 411 Motor Speedway to contest a $10,000-to-win purse on Friday evening. And as is always the case, the Southern Nationals finale will take place on the high banks of the Tazewell(TN) Speedway on Saturday in another $10,000-to-win showdown.

InsideDirtRacing.com will offer coverage of the remaining events including live updates.