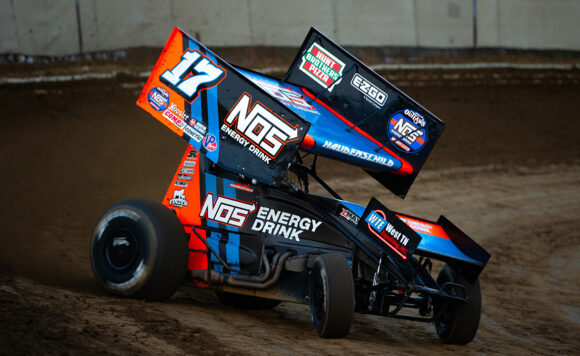 The Stenhouse Jr.-Marshall Racing driver will look to build off a career year, starting at the 2021 DIRTcar Nationals

In those few months, Sheldon Haudenschild claimed the most wins – five of his seven for the year – and, if not for two incidents of bad luck that took him out of the race, he would’ve earned more points in that time span than 2020 champion Brad Sweet.

So, are he and his Stenhouse Jr.-Marshall Racing crew prepared to go after the championship next year?

“Definitely,” Haudenschild said with certainty. “That’s our goal. If we can get going a little sooner in the year and get a lot of races… you know, pretty short season this year. We skipped a lot of tracks I feel like we’re good at. Looking forward to ‘21 and hopefully going to a full schedule and getting all the races in. Just trying to mimic the end of our year and turn it into a full year next year. Hopefully, we can do that.”

While the 2020 season was shorter than intended due to COVID-19, the Wooster, OH native was able to turn it into a career year. In his three previous full-time seasons on the World of Outlaws tour, Haudenschild had collected seven wins and never finished better than seventh in points. He ended this season with seven wins and a fourth-place finish in the championship standings. He also ended the year with a single-season career-high 28 top-five finishes and 239 laps led – second only to Kyle Larson’s 278 laps led.

The 27-year-old credits much of his 2020 success to the reunion of him and crew chief Kyler Ripper. Their chemistry was established years ago when Haudenschild drove his own #93 car and Ripper was the crew chief. A friendship was birthed, along with a healthy working relationship.

With Ripper back by his side, after a few years apart, Haudenschild said he’s having fun on race days again. It’s created a good working environment for the entire team and made a positive impact on their results.

“Chemistry is a big part of it,” Haudenschild said. “When we show up to the track, we have a really good race car and a guy who only thinks about it. Ripper has done a really good job of that and communicates with me really well and lets me know what is going on. I’m able to tell him what I feel in a good way and we’re able to hash things out and get it figured out for the better.”

With the crew he has now, made up of Ripper, Nickolas Goodfleisch and Drew Brenner, Haudenschild said he’s able to enter each race confident he has a good handling car. It’s a key component to his mentality of being able to run the car as hard as he needs.

To be a champion Haudenschild knows it’s about having a strong season year-round. Not just in the last 20 races.

“Obviously, if you can win one in Florida (at Volusia Speedway Park during the season-opening DIRTcar Nationals) that helps to get the year going,” Haudenschild said. “A lot of times I feel like if I can get through Florida consistently and feel good with my race car and then head out west, I feel like there’s no doubt in my mind we can be right there. Anything can happen out west. I feel like I have a lot of strong tracks out there. I feel like our confidence will be good going out west with me and Ripper.”

Haudenschild picked up his first career World of Outlaws win at Volusia Speedway Park in 2018. Last year, he finished 11th, eighth and fourth, respectively, in the three season-opening races. He and the rest of the stars of the World of Outlaws will kick off the 2021 season Feb. 5-7 at the half-mile Florida track during the 50th DIRTcar Nationals.

With a career year behind him, Haudenschild is confident he and his NOS Energy Drink-backed team can hit the ground running at Volusia and contend for the 2021 championship.

“There’s no doubt in any of our minds that that’s where we can be and that’s what we’ll strive for,” he said. “I think as long as we’re winning races and stay consistent there’s no reason we can’t be there at the end of the year.”