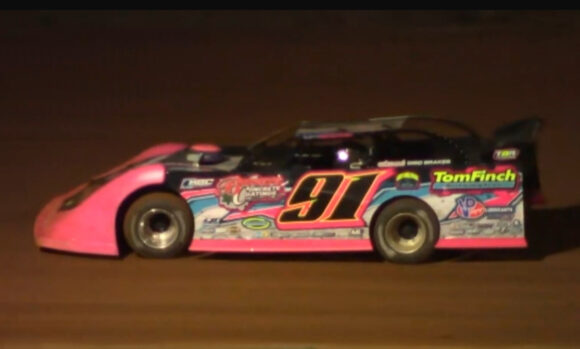 The Southern All Stars Dirt Racing Series took to the track on Saturday night to complete a two-race weekend at Southern Raceway. After a dominating night that saw him lead every lap, Rusty Schlenk scored the win at the Milton, FL track. The McClure, OH driver earned $5,000 for the win of a race that was aired by FloRacing.com.

A total of 20 cars were entered for competition.

Ryan Crane earned the right to start the feature from the pole position by virtue of leading Group A qualifying with a lap of 14.370 seconds around the 3/8 mile clay oval. That time beat out Joseph Joiner, G.R. Smith, Colin Shipley and Billy Franklin.

The top-5 from each qualifying group were locked into the feature.

Austin Franklin and Brandon Carpenter won the two B-main races used to set the remainder of the starting lineup for the main event.

At the start of the 50-lap feature it was Schlenk who took the early lead with Crane, Joiner, Smith and Freeman in arrears. However, a lap 3 caution for Thrash slowed the pace.

On the lap 3 restart, Joiner moved to second and sought to keep pace with Schlenk but another caution flag waved just one lap later for a multi-car incident at the tail of the field.

Schlenk pulled away from the pack during an early green flag run as Joiner, Smith, Crane and Franklin gave chase. The leaders found the tail of the field as Crane, Freeman, Franklin and Hanger engaged in a fierce fight for positions 4-7.

A lap 21 caution would put a damper on Crane’s hopes as his car received damage after being collected by another spinning machines.

The middle stretches of the race continued to feature Schlenk leading Joiner, Smith, Freeman, Hanger and Franklin. A series of caution allowed Hanger to rise as far as third and into a fight with Joiner and Freeman for top-5 spots.

In the end, Schlenk would survive multiple late restarts until he ultimately cruised under the checkered flag to score the win.

“I’m glad I made the trip,” Ohio driver Schlenk said in victory lane. “It took us all Thursday and all Friday to figure it out but I think we nailed it tonight. I was a little too tight, I wasn’t expecting it to rubber up that quick. I saved a little bit for the last five laps. Thank God we had a caution there and got rid of that lapped traffic. It all worked out in our favor.”