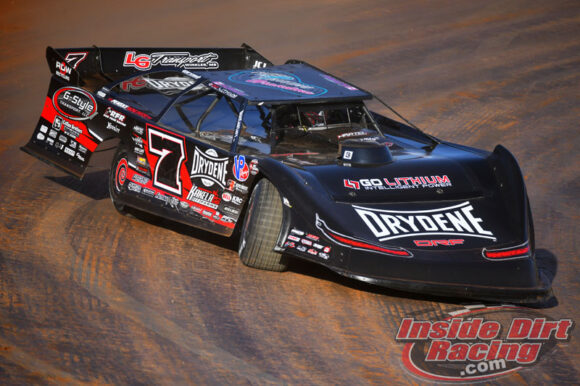 St. Patrick’s Day is meant to be an Irish holiday but Canadian racer Ricky Weiss was the one who found a four-leaf clover on Saturday night in the Ultimate Super Late Model Series-sanctioned Shamrock event at Boyd’s Speedway. After turning in a dominating performance it was the No. 7w car that wheeled into victory lane at the Ringgold, Georgia track.

The Sniper Chassis driver from Headingly, Manitoba collected $5,000 for his efforts.

Feature Account: Weiss used his outside front row starting position to his advantage at the start of the 40-lap feature as he outdueled fellow front row starter Freeman as the two ran side-by-side for the first couple of laps before the eventual winner took possession of the early lead of the race with Owens, Hedgecock and Weaver rounding out the top-five. Weiss then worked to slip away from his pursuers by lap 4 as Owens harassed Freeman for the runner-up position.

However, slower traffic would become a factor in the race that ultimately ran caution-free. As Weiss worked to put cars a lap down, Freeman, Owens and Hedgecock were able to close in. Just after halfway, Freeman closed right to the rear spoiler of the Weiss machine and even looked inside in an attempt to take the lead. Instead, Weiss beat back the challenge while Freeman then had to hold off a challenge of his own from Owens,

Weiss was then able to building some breathing room that would eventually allow him to sail under the checkered flag to score the victory.

“I’ve got to give credit to the guys back at the shop for working their butts off,” Weiss said in his victory lane interview. “These cars have been badass and once I got in this thing I knew it was good and we just needed a little bit of luck. We came out here and tried some stuff and started off really good and kept going from there.”