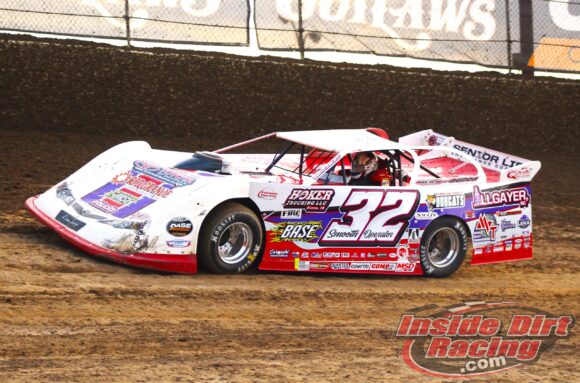 Bobby Pierce was awarded the win after a DQ

Bobby Pierce crossed the finish line second behind Ricky Weiss after those two drivers had made contact late in the feature. However, the race would ultimately be decided in post-race tech when Weiss had his car to fail handing the win to the ‘Smooth Operator’.

The Bob Pierce Race Cars driver from Oakwood, Illinois earned $12,000 for his efforts at the track located in Rossburg, Ohio in a race aired live by FloRacing.com.

Points accumulated on Thursday and Friday will be used to set the heat race lineups for Saturday night’s World 100.

A total of 107 cars were signed in for competition

Feature Re-cap: The 25-lap feature took the green flag with Bronson leading Zeigler, Weiss, McCreadie and Pierce. Weiss passed Zeigler for second on the second circuit while Pierce got by McCreadie for fourth. One lap later, Marlar took fifth away from McCreadie.

The field settled into a rhythm by lap 5 as the front runner clicked off laps. Weiss kept Bronson in his sights as the lead duo closed in on the tail of the field.

Pierce got by Zeigler for third just after halfway then moved in on the top-2. Both Weiss and Pierce passed Bronson to move into first and second respectively. Weiss and Pierce then engaged in a fierce battle for the lead among slower traffic as the race neared its conclusion.

Ultimately, Weiss would fight off the challenge from Pierce to claim the apparent win but that wasn’t the end of the story as Weiss failed post-race tech droop rule check.