InsideDirtRacing.com will be providing live updates for the World of Outlaws Craftsman Late Model Series race from The Dirt Track in Charlotte on Friday evening, November 2, 2018. These updates are being provided by Richard Allen( @RichardAllenIDR on Twitter).

Live Updates are brought to you by Tennessee RV. Click here to visit their website for all your RV sales and service needs.

To follow along, simply scroll down and look under each heading for that particular class. Also, refresh the page frequently as new information will be added often.

Classes in action: World of Outlaws Late Models for $12,000-to-win

*Please note that these updates will primarily focus on the World of Outlaws Late Model Series race.

The drivers meeting is slated to begin at 3:30pm with racing action to follow.

Rain is in the forecast for Friday night in the Charlotte area.

This is the first race in a two-night weekend event for the World of Outlaws World Finals presented by Can-Am. WoO Sprint Cars and DIRTcar Big Block Modifieds will also be in action.

These will be the final two races of the 2018 season for the World of Outlaws Craftsman Late Model Series.

3:10- It’s raining here at the moment but they expect it to pass quickly. The plan as of now is to go ahead with racing tonight.

4:10- It has basically stopped raining. Track prep should begin soon.

Just announced that the drivers meeting will be held at 7:00.

7:35- Sprint cars are being called to the track for warmups. Heat racing and B-mains for all classes will follow.

11:40- Just announced that whatever racing does not get finished tonight will be completed tomorrow at 1:30. The track has a midnight curfew and the rain from this afternoon just put us too far behind to get it in tonight.

Please also consider reading: It all comes down to this weekend for Marlar, Madden and Sheppard

Heat Race Results: There will be six heat races with the top-3 from each transferring to the feature. Heat race winners go to a redraw to set the first three rows in the feature.

*Madden took the lead on the start and led all the way.

*O’Neal took second away from Pearson on a mid-race restart then the two fought for the position the rest of the way with Pearson spinning after contact on the last lap. Bloomquist led all the way.

*Knuckles got into the turn two wall while racing with C Roberts for second. Multiple cautions slowed this race.

*Ferguson broke while leading by a big margin with four laps to go. Eckert had an issue and went to the pits at the same time as Ferguson. Moran inherited the lead when Ferguson dropped out.

*Sheppard led all the way but there was some crazy racing behind him.

B-main Results: There will be three B-mains with the top-2 from each going to the feature.

If the Big Block Modified serves as any indication, tires could be a big factor in this daytime race. There were numerous flats in that feature.

Lap 31 caution. Great racing as Sheppard and McCreadie have been swapping the lead in traffic. Sheppard leads McCreadie, Marlar, Bloomquist and Moran.

Great race. McCreadie made a couple of attempts to take the lead late but Sheppard held him off in traffic. Madden’s early exit combined with podium finishes for Sheppard and Marlar likely ended his chances to win the title. 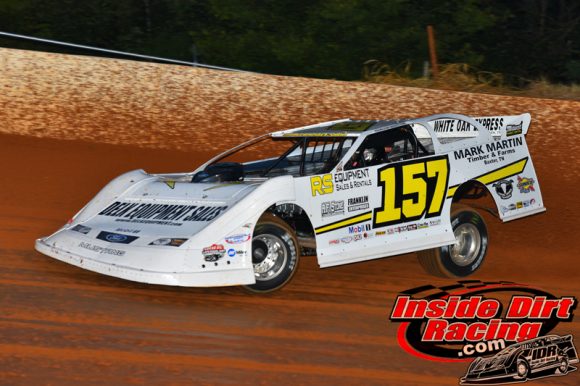