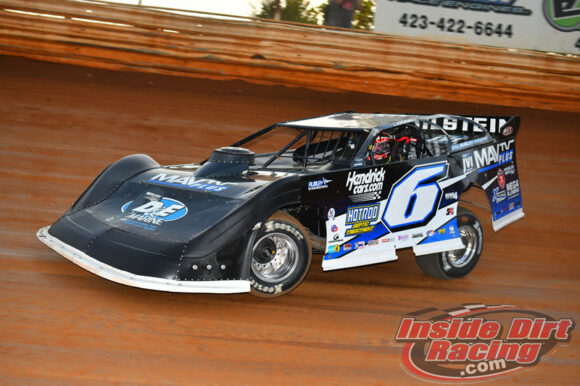 Kyle Larson doesn’t appear to be slowing down in terms of his racing efforts just because the calendar has tripped over to 2022. Fresh off his run in the Lucas Oil Chili Bowl Nationals race for Midget Sprint Cars, the reigning NASCAR Cup Series champion has entered this weekend’s World of Outlaws Morton Buildings Late Model Series season opening weekend at the Volusia Speedway Park in Barberville, Florida. The three-night event will offer completely separate $10,000-to-win shows on Thursday, Friday and Saturday evenings at the track located not far from the Daytona International Speedway.

While Larson is most noted for his success on dirt in Sprint Cars and Midgets, he has taken to Late Model racing over the past couple of seasons driving a Longhorn Chassis prepared by Kevin Rumley and the K&L Rumley Enterprises team. In 2021, ‘Yung Money’ won the season opening Lucas Oil Late Model Dirt Series feature at Florida’s All-Tech Raceway along with a FloRacing Night in America event at Indiana’s historic Brownstown Speedway.

Larson grabbed trophies from the World of Outlaws Late Model Series in 2021 as well. In July of last year he collected $50,000 for winning the crown jewel Prairie Dirt Classic at the famed Fairbury(IL) American Legion Speedway then added a triumph at Sharon(PA) Speedway one month later.

Even Yung Money needs a little bit of Sunshine!

Larson’s mastery of dirt surfaces has reached unprecedented proportions, particularly over the past couple of seasons. While serving out a suspension by NASCAR in 2020, the Elk Grove, California native went on a tear that saw him rack up wins by the dozens on clay surfaces in Midgets, Sprint Cars and Late Models.

Please consider also reading “How might a shortage of cars in the shop impact racing on the track?“

In 2021, his legend reached even greater heights. At the same time he was in the process of winning the Cup championship, ten NASCAR points-paying races and the NASCAR All-Star Race, he continued to draw large crowds who watched in awe as he won the dirt racing’s biggest events. Aside from the Late Model wins mentioned above, Larson won the Chili Bowl in 2021 along with the World of Outlaws NOS Energy Drink Sprint Car Series-sanctioned King’s Royal at Ohio’s Eldora Speedway and the Knoxville(IA) Nationals.

In 2022, the NASCAR Cup Series will return to more of a normal weekend schedule with practice and qualifying returning after a two year hiatus due to Covid-19 restrictions. That will likely hamper Larson’s dirt racing at least to some degree. However, this weekend Sunshine Nationals will not conflict with any NASCAR commitments which will allow the 30-year-old driver to sling some dirt in a Late Model.

For fans who can’t attend, the racing action will be aired live by subscription-based DirtVision.com.