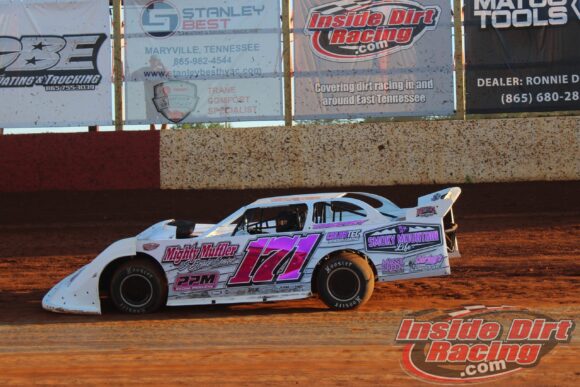 Kyle Courtney led all 20 laps to claim the win

As part of the Mountain Moonshine Classic that featured the Lucas Oil Late Model Dirt Series, the Smoky Mountain Speedway also staged racing in the Limited Late Model division. Kyle Courtney picked up the win in that class and earned a $1,200 payday for his efforts.

At the start of the 20-lap feature it was Courtney who bolted to the early lead with Neely, King and Crabtree giving chase. King immediately went to work as he drove by Neely to claim second as the cars completed the first lap. Neely’s fall continued as Crabtree and Lowe moved around the No. 3 machine on the second circuit to stake claims to the third and fourth positions respectively.

Lowe’s rise through the field took him by Crabtree for third and then around King to grab second by the end of the fourth lap. That left King and Crabtree to fight over the third spot in the running order.

Giffin charged passed both King and Crabtree to move into third on lap 6 as the furious position swapping behind Courtney’s leading car continued.

Hedgecock, a frequent winner in the Limited Late Model class at SMS, entered the top-5 following a lap 7 restart when he went around Neely and joined a three-way battle for positions 3-5 with King and Giffin.

Courtney, however, was slipping away from the field as the battles behind him raged on.

Hedgecock again used a restart opportunity to pull forward as he took fourth away from Giffin on lap 14. But that gain would prove to be short lived as Pucket wrested the position away one lap later.

But as the laps clicked off, it was Courtney who would go largely unchallenged to score the victory.