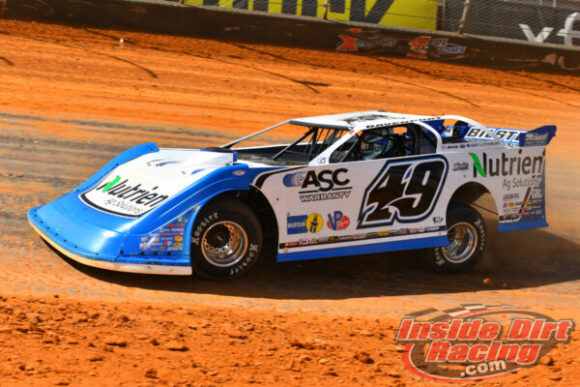 Jonathan Davenport took the lead late and went on to win

The Valvoline Iron Man Late Model Series took to the newly reopened West Virginia Motor Speedway for ‘The Return’ on a Sunday night event. At the end of the night, it was Jonathan Davenport who scored the win at the Mineral Wells, WV facility in a wild night of racing that featured numerous twists and turns shown live by FloRacing.com. The Blairsville, GA driver earned $8,000 for his efforts.

A total of 18 cars were signed in for competition.

Jonathan Davenport was fastest in Group A qualifying with a lap of 18.520 seconds around the 5/8 mile clay oval to beat out Devin Moran, Tyler Erb, Freddie Carpenter, and Jacob Hawkins.

Drake Troutman led the way in Group B time-trials with a time of 19.488 seconds to beat out Colton Flinner, Walker Arthur, Anthony Kinkade and Dustin Nobbe.

Devin Moran won the first heat race of the night ahead of Tyler Erb, Tristan Chamberlain, Freddie Carpenter, and Jonathan Davenport who suffered a flat left rear tire on the last lap while leading the heat.

Colton Flinner was the victor in the second preliminary over Dustin Nobbe, Drake Troutman, Anthony Kinkade, and Ed Shuman.

At the start of the 30-lap feature it was Moran who immediately went to the front with Flinner, Erb, Chamberlain, and Davenport trailing. Davenport began to march forward on the second circuit when he passed by Chamberlain for the fourth position.

By the sixth lap, Moran was pulling away from the pack while Flinner, Erb, and Davenport tightened their battle behind the leader. On lap 11, Davenport moved ahead of Erb to claim third just before a lap 12 caution flag for Jason Salmons was shown to the field.

On lap 13, Davenport took second away from Flinner and set off after Moran. At the same time, Erb closed in to challenge Flinner for third. However, a lap 21 caution for Chamberlain again slowed the action.

The lap 21 caution period drama continued just before the green flag was about to be displayed as Davenport surrendered the lead to come to the pits for a tire change. Erb was elevated to the race lead as a result.

Davenport jumped all the way up to fourth on the lap 21 restart behind Erb, Troutman, and Carpenter. Once again, flat tires came into play as the third running car of Carpenter suffered a deflated right rear to bring out a caution.

On the lap 22 restart, Davenport bolted to second behind Erb while Moran asserted himself up into third. Davenport then began to harass Erb for the race lead with five laps remaining. Moran closed in on the lead duo with four circuits remaining.

Over those final two laps, Davenport held back the advances of Moran to sail under the checkered flag and score the victory.

“It was a race of attrition, for sure,” Davenport remarked in his victory lane interview. “It was like a bull ring race on a super speedway. Man, there were flats and Tyler broke a left rear hub or something and there was a header laying over the race track. My shield was coming off and I was trying to knock it back on, my eyes are full of dirt. It was a hell of a show.”