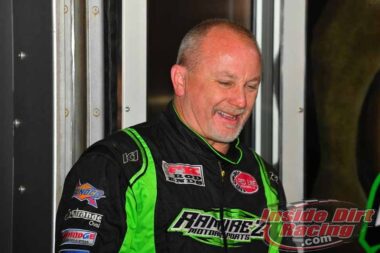 The Dirt Late Model “off-season” always brings about a number of changes whether it be from team to team, from series to series, or from chassis brand to chassis brand. Count four-time Lucas Oil Late Model Dirt Series champion Jimmy Owens among those who has made a change at the end of the 2021 campaign. When the popular driver showed up for competition in this weekend’s ‘Peach State Classic’ at Georgia’s Senoia Raceway, it became apparent that he and his team had made the move to Longhorn Chassis.

Owens and his Ramirez Motorsports team have employed Rocket Chassis since 2017 and have won numerous feature races with the West Virginia-bases chassis builder. The Newport, Tennessee driver also won the 2020 Lucas Oil championship with those cars. The 49-year-old racer placed fourth in this season’s final standings with just one victory on that tour.

In all, Owens visited victory lane a total of eight times overall in 2021 with seven of those triumphs coming away from the LOLMDS. However, many of the biggest purses of this season were collected during this year by drivers who sat behind the wheel of North Carolina-built Longhorn Chassis cars. Brandon Overton and Jonathan Davenport have been the most dominant drivers of the year while Tim McCreadie claimed the Lucas Oil Late Model Dirt Series crown. Each of those drivers and their teams use Longhorns.

Now Owens has the same equipment as those who have been the stars of 2021.

The move was confirmed when @JimmyOwens_20 tweeted:

Our brand new @LonghornChassis is out of the box @SenoiaR and ready for opening night of the #PeachStateClassic! 🍑

The Peach State Classic will be made up of a $10,000-to-win show on Friday night followed by a $52,052-to-win event on Saturday. FloRacing.com will have live coverage.