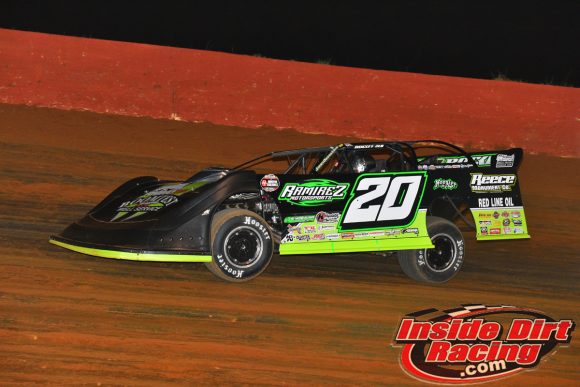 GRANITE CITY, Ill. (July 12, 2019) – Jimmy Owens fought off challenges from both Shannon Babb and Josh Richards to win the NAPA Know How 50 – Presented by Schoenfeld Headers on Friday night at Tri-City Speedway.

Owens earned his first-ever win at the Kevin and Tammy Gundaker-promoted facility. It was Owens’ second Lucas Oil win of the season and the 62nd of his career for the 3-time national champion.

Owens held the point for the first 11 laps of the race until Babb forged ahead for a lap. Owens and Babb went back-and-forth until just past the half-way mark of the race. Babb held the second spot until he suddenly slowed on the 32nd lap and retired from the race.

Richards picked up the challenge for the lead as he pulled even with Owens on several occasions, but never managed to take the top spot. Earl Pearson Jr. charged by Richards to take the runner-up position on the final lap. Pearson and Richards joined Owens on the podium as Stormy Scott recorded his best career series finish by taking fourth ahead of 23rd starting Devin Moran, rounding out the top five.

“I want to thank all of my crew, my car owner Leon Ramirez and his family for giving me this opportunity to drive their car. Thanks to the fans for coming I hope they enjoyed the show. This will give us a lot of momentum heading to Wheatland tomorrow night. We have been leading a lot this year and things have happened. We had a good car last night. We made a few tweaks for tonight and everything went our way.”

Pearson topped off a spirited run with his last lap pass of Richards. “I got too tight around the bottom, so I went to the top. I could run right through the middle and the car wasn’t so tight. To come home second after starting 15th, we worked hard to get there. I really love this track; it’s been good to us in the past. It races so good.”

Richards, who came into the weekend with back-to-back second place finishes was pleased with his third-place run. “Last night we got into the tire barrier and it cost us a good finish. I felt like tonight I should have moved up sooner. Jimmy had a good car. I felt like I could have got him, but he was just better tonight.”