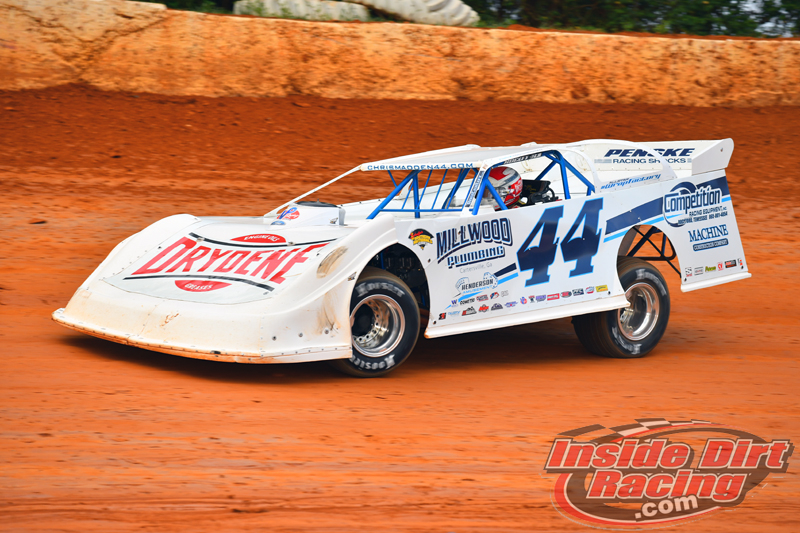 The Schaeffer’s Oil Southern Nationals made its penultimate start on Friday night at 411 Motor Speedway. At the end of the action, it was Chris Madden who scored his fourth series win of 2020 after making a mid-race pass for the lead then cruising to the win. The Gray Court, SC racer earned $10,053 for his efforts.

Kyle Hardy was fastest in Group A qualifying with a lap of 14.432 seconds around the 3/8 mile clay oval to beat out Brandon Overton, Chris Madden, Pearson Lee Williams and Donald McIntosh.

Cory Hedgecock outperformed those in Group B time-trials by posting a time of 14.288 seconds to top Dale McDowell, Ross Bailes, Ryan King and Jensen Ford.

Chris Madden earned the pole for the feature by winning the first heat race of the night ahead of Kyle Hardy, Donald McIntosh and Tyler Millwood while Brandon Overton took the second preliminary over Pearson Lee Williams, Logan Roberson and David Payne.

It was Cory Hedgecock who claimed the third heat race by besting Ross Bailes, Michael Chilton and Jensen Ford just before Dale McDowell topped Ryan King, Heath Hindman and Colten Burdette in the fourth and final heat of the night.

At the start of the 53-lap feature Hedgecock quickly went to the race lead with Madden, McDowell, Bailes and Overton trailing. Bailes moved up to challenge McDowell for third on the second lap but the veteran driver held the spot. 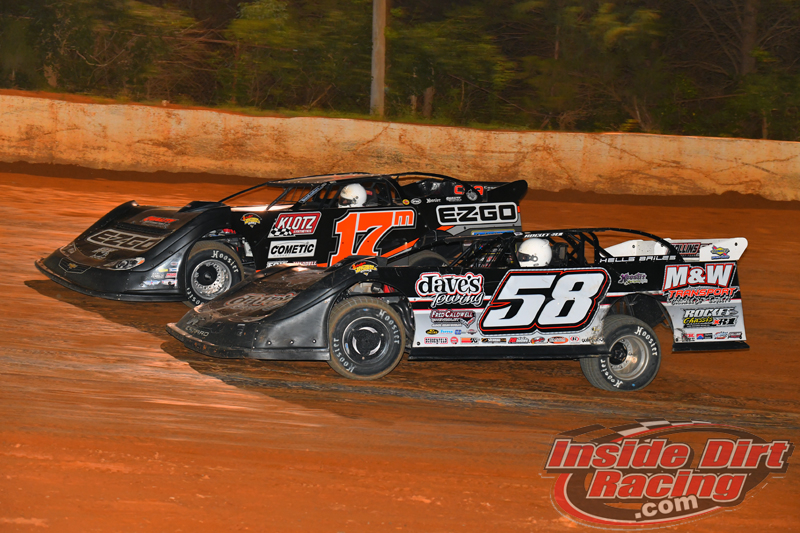 Hedgecock and Madden began to slip away from a tight fight for third between McDowell, Bailes and Overton on lap 5. Madden then closed in on the rear spoiler of Hedgecock on lap 6 as those two drivers battled for the top spot on the leader board.

On lap 14 series points leader Overton took fourth away from Bailes leaving the No. 58 to battle with Hardy for fifth.

The top-5 of Hedgecock, Madden, McDowell, Oveton and Bailes sorted themselves out and clicked off laps through the middle section of the feature. Then Madden made his move on lap 31 as he passed by Hedgecock to grab the lead. Hedgecock fought back with an inside move but the five-time series champion held onto first place. 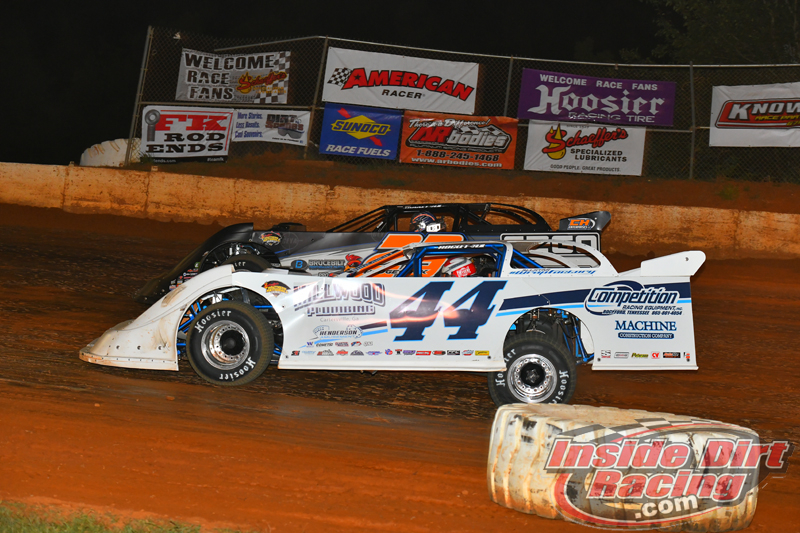 As Madden worked through heavy traffic in a feature that would run caution free, McDowell took second away from Hedgecock on lap 37. The No. 17m then set his sights on the leader.

With seven laps remaining McDowell began to cut into the advantage held by Madden. As the laps wound down, however, the No. 44 remained in front as Madden sailed under the checkered flag for the win. 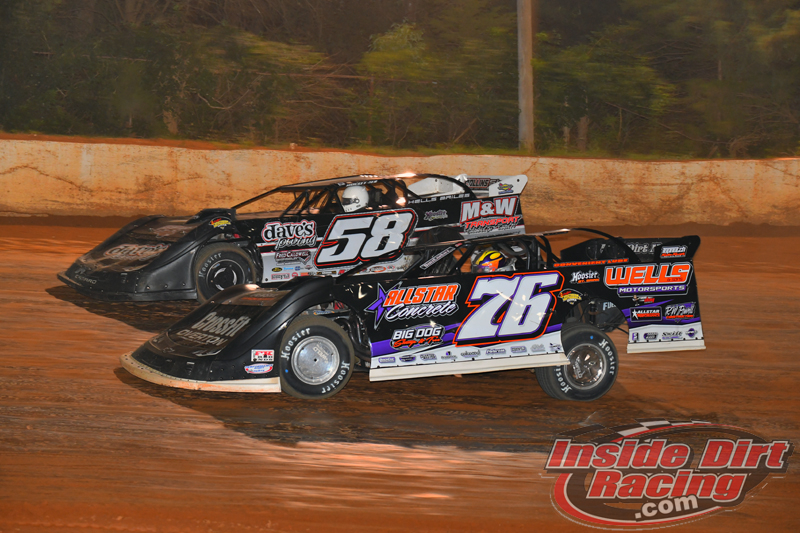 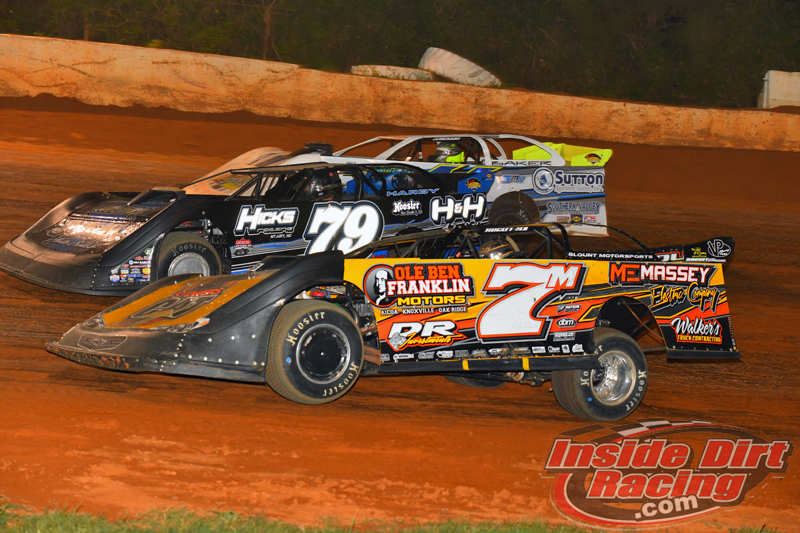 Donald McIntosh (7m) and Kyle Hardy (79) race for position under a lapped car. 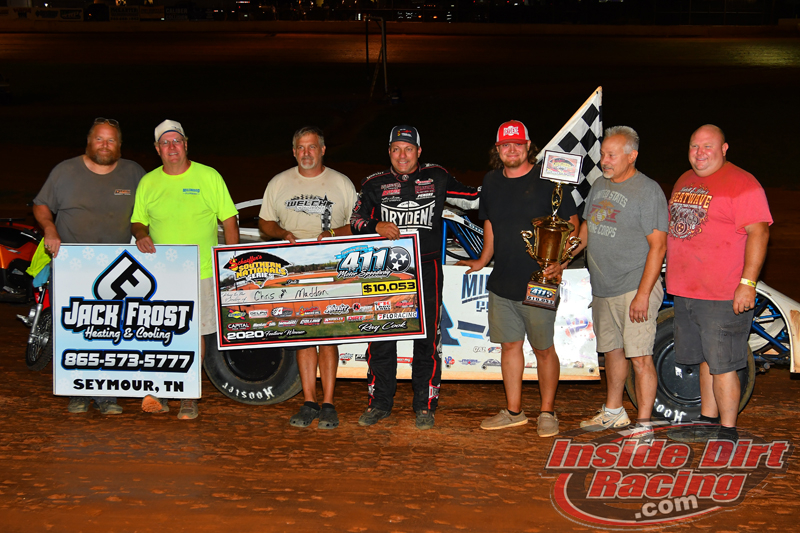 Chris Madden and crew celebrate their win at 411.