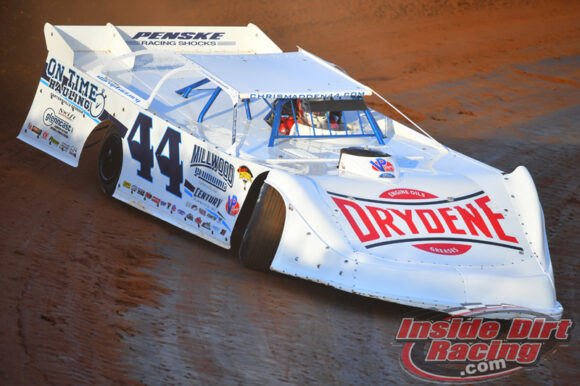 The Schaeffer’s Oil Southern Nationals dropped into the Volunteer Speedway for its third feature race of 2020. Chris Madden took the winner’s trophy and added to his series points lead. The Gray Court, SC driver earned a $3,500 payout away from the Bulls Gap, TN facility. The race was streamed live by DirtonDirt.com.

The top-5 from each qualifying group would be locked into the feature.

Chris Madden led the way in Group A qualifying with a lap of 13.488 seconds around the 4/10 mile clay oval to beat out Brandon Overton, Cory Hedgecock, Jensen Ford and Ryan King.

Vic Hill proved to be quickest in Group B time-trials with a mark of 13.748 seconds to outperform Logan Roberson, Ross Bailes, Tyler Millwood and Clay Coghlan.

Pearson Lee Williams was the winner of the second B-main ahead of Forrest Trent, John Baker, Dusty Carver and Aaron Guinn.

At the start of the 35-lap feature it was Madden who went to the early lead with Hill, Overton, Hedgecock and Roberson trailing. However, Hill made a quick move on the backstretch to grab the lead away from Madden by the completion of the first circuit.

Hedgecock moved forward on lap 3 as he took third away from Overton but the move would be short lived as Overton took the position back in the next set of turns.

Madden used the outside groove to take the lead away from Hill as the cars raced under the flag stand on lap 7. Shortly afterwards, Overton would move int the runner-up position as he took the spot away from Hill.

Madden began pulling away from his pursuers on lap 14 as the No. 44 car worked through slower traffic.

A caution on lap 21 for a flat tire on the Williams car. On the ensuing restart, Hedgecock went by Overton to get second. That set in motion a position swapping battle between Overton and Hedgecock from which Overton would eventually emerge with the position.

As the laps clicked away, Madden controlled the race all the way to the checkered flag.