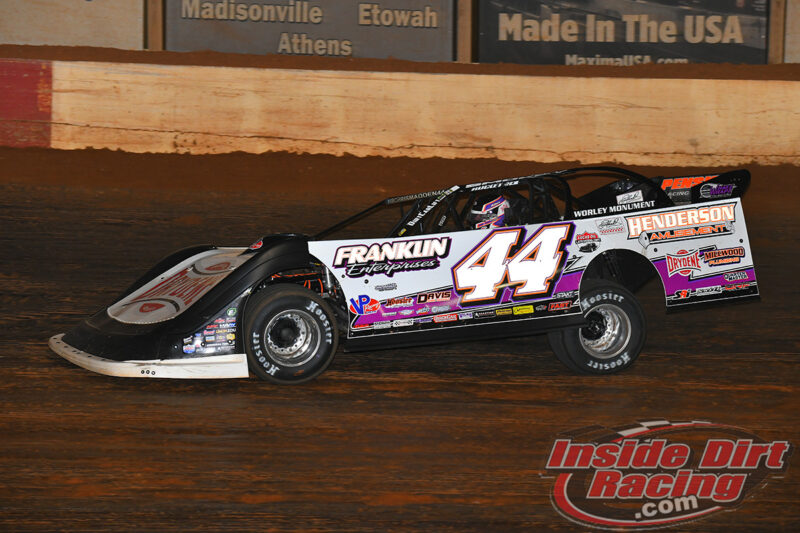 Even though the 2022 season is only just now reaching its midway point, Chris Madden has already experienced a career year by earning big paychecks resulting from numerous feature wins. That trend would continue on Saturday night at Smoky Mountain Speedway when the driver known as ‘Smokey’ led from flag to flag in the Lucas Oil Late Model Dirt Series-sanctioned Mountain Moonshine Classic.

The Rocket Chassis driver from Gray Court, SC earned $50,000 for his efforts at the Maryville, Tennessee track.

A total of 45 cars were signed in for competition.

The lineups for Saturday’s heat race had been determined by twin feature races contested on Friday evening.

Feature Re-cap: Madden jumped out to an early lead when the green flag waved with Ferguson, Davenport, Marlar and Thornton trailing. Quickly a caution flag waved over the field when Wilson spun just after the completion of the first lap.

On the ensuing restart, Davenport went to second behind Madden while Thornton moved forward by taking over the fourth spot. Further back, Overton gained a position by taking fifth. At the front of the field, front runners Madden and Davenport began to separate themselves from the rest of the pack.

The lead duo found themselves fighting with slower traffic on lap 12 as they continued to maintain their advantage over their pursuers. Overton, however, began making moves that would eventually draw him closer to the leaders when he passed by Ferguson to claim the third position.

A lap 23 caution for Hughes allowed the field to reset. During the event’s middle section, the top-5 of Madden, Davenport, Overton, Thornton and Ferguson strung out a bit over the big, fast track as they appeared to be content clicking off laps.

Marlar made a moved on lap 31 when he wrested fifth away from Ferguson. Soon after, Ferguson’s fade continued as McCreadie also got by.

Three of the sport’s biggest stars in the persons of Madden, Davenport and Overton looked to be on their way to settle the lucrative issue among themselves as the race entered its final third. Davenport closed the gap on Madden by making some daring moves to get around slower cars while Overton kept the first and second place cars in his sights.

The action got more intense as the race moved toward its conclusion with those three drivers just feet apart. With Davenport right on his rear spoiler, Madden was briefly held up by a slower car which caused him to brush the outside wall in turn four as the cars were coming to the white flag. Davenport made a bid to steal the victory but Madden was able to push back the challenge and sail on to the win.

Click the play button below to hear a recorded interview with feature winner Chris Madden: