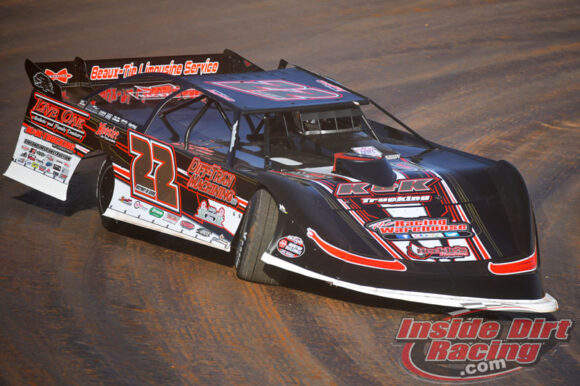 Chris Ferguson is having a career year in 2022 and continued that run by scoring a Thursday afternoon win in the Eldora Million Group A preliminary at Eldora Speedway. These preliminary races will set the heat race lineups for Thursday night’s $1,000,000-to-win event.

The Team Zero Race Cars driver from Mt. Holly, NC earned $12,000 for his efforts in a race held on the half-mile facility located in Rossburg, Ohio and shown live by FloRacing.com.

The top-16 were inverted for the purpose of setting the lineups for the heat races. The top-5 from each heat would transfer to the main event.

Points acquired during all of the day’s activities would play an important role in setting the heat race lineups for the Eldora Million.

Mason Zeigler took the lead early but Mike Marlar and Dennis Erb Jr. made their way toward the front while Dale McDowell and Tyler Erb battled for the fifth and final transfer spot. A late caution set up a final dash to the finish. Marlar took the lead on the lap 9 restart then drove on to the win. A photo finish between Zeigler and Dennis Erb Jr. decided the runner-up spot. McDowell was in a transfer position but dropped off the pace at the white flag and fell back.

Chris Madden bolted to the lead on a lap 2 restart leaving Shannon Babb, Kyle Bronson, Ashton Winger and Mark Whitener to battle for transfer positions. Madden then drover to a lead of more than three seconds while Bronson closed in on Babb for second. Madden then sailed to the win.

Chris Ferguson took the lead at the start with Shane Clanton following. Those two drivers exchanged slide jobs over the first two laps until Ferguson took control. A caution on lap 5 for debris set up a restart. Ferguson maintained the lead after the restart but Clanton continued to harass the early leader. In the end, Ferguson would claim the win.

Devin Moran immediately jumped to the lead with Cade Dillard pursuing. Top-5 runners Kyle Hammer and Ross Bailes tangled just after the completion of the first lap to bring out a caution as both cars suffered damage. After the restart, Moran drove away to a lead of more than four seconds until a lap 9 caution slowed the field again. Daulton Wilson took second on the final restart as Moran sailed to victory.

Feature Re-cap: At the start of the 25-lap A Group feature it was Ferguson who jumped out to the early lead with Madden, Moran, Marlar and Zeigler trailing. Babb and Bronson passed by Zeigler on the third lap to assume fifth and sixth in the running order as Ferguson began to slip away from his pursuers.

Ferguson began to encounter slower traffic by lap 6 but the No. 22 was able to maintain his advantage.

Marlar took third away from Moran on lap 11 and looked to close on the second running Madden. All the while, Ferguson continued to show the way as he worked through slower cars.

In the end, it was all Chris Ferguson who would lead all 25 laps in a race that ran caution free for its full distance.