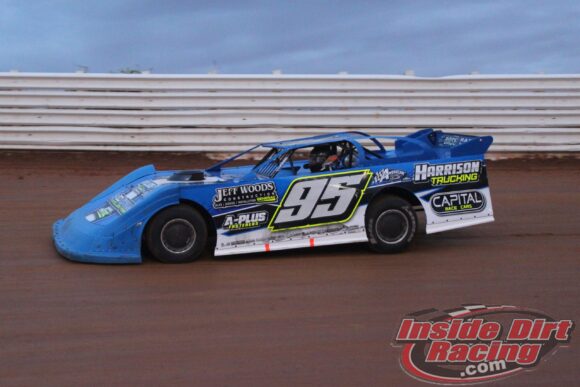 SUMMERTOWN, TN – Brandon Williams of Crossville, TN was able to guide his good handling car through lapped traffic, keep all challengers behind him, and become the King of the Hill and pocket $7,500 Saturday night after winning the King of Hill 60 for the Newsome Raceway Parts Crate Racin’ USA Dirt Late Model Series at Thunderhill Raceway.

Driving the Jeff Woods Construction Special, Williams took the lead from pole sitter Corey Dunn on lap two, and then raced hard enough to catch lapped traffic to ease his way through it to lead the rest of the way. Williams held off Michael Page of Douglasville, GA and Christian Hanger of Winchester, TN.

“We got here Thursday for practice and it was the first time I’d ever seen the place,” Williams said. “We took some good notes, and everything just worked our way last night and tonight. I knew Page and Hanger were right on my tail in lapped traffic, so I knew on the restarts, I only had a few laps until I caught the lapped cars. I raced as hard as I could until I caught the lapped cars and had a little breathing room to get around them. My can handled well enough that I could go to the outside to get through the traffic.”

Page finished second in the Troy Beard Racing Special and Hanger took the third spot in the Hanger Racing Special. Wil Herrington of Hawkinsville, GA was fourth in the 5m Construction Rocket. Herrington made a bold move on lap 50 to move up from sixth the fourth, and that finish put Herrington into a tie for the Newsome Raceway Parts Dirt Late Model Series point lead with Cruz Skinner of Oxford, AL, each with 722 points.

That move to finish fourth and share the point lead also earned Herrington the VP Racing Lubricants Slick Move of the Race Award. Jake Rainey of Hiram, GA took the fifth spot in the Harrod Logging Special, and Oakley Johns of Hohenwald, TN was sixth in the Shoals Box and Pallet Special.

Tyler Wood of Hohenwald, TN drove the Johns Farms Special to a seventh-place finish to earn the Fullmoon Graphics Lucky 7 Award, and Brad Skinner of Spring Hill, TN finished eighth in the Dixon Plumbing Rocket. Eric Hickerson of Linden, TN was ninth in the Hickerson Racing Special and Tim Busha of Boaz, AL rounded out the top ten in the Busha Racing Special.

In preliminary action, the three ten-lap KRC Power Steering B-Main Races were won by Cruz Skinner in the Skinner’s Body Shop Rocket, Trynt Lloyd of Jacksonville, FL in the Tom Kelly Construction Special, and Steven Holcomb of Santa Fe, TN in the Clark Marine Special. David Seibers of Chapel Hill, TN earned a starting spot in the main event by winning the ten-lap Non-Qualifiers Race in the SMS Plumbing and Electric Special.

Dunn took the lead at the start of the race followed by Williams, Page, Herrington, and Hanger. Williams drove under Dunn to take the lead on lap two, as Page made it three-wide. Behind the lead trio, Herrington and Hanger raced side-by-side for the fourth spot on lap three. By lap ten, Williams had pulled out to a 2.6 second lead over Dunn, who was busy trying to hold off Page for second.

On lap 12, Page was able to take over the second spot, as Williams caught the cars on the tail of the lead lap. The lapped traffic went away on lap 14 when the first of four caution flags came out when Justin Maxwell of Spring Hill, TN in the Cantcom 1 Rocket and Brock Hall of Ethridge, TN in the Hall Insurance Special tangled on the backstretch.

Williams lined up in a row by himself with Page, Hanger, Dunn, Herrington, Rainey, Brad Skinner, Busha, Johns, and Lloyd doubled up behind him for the Dixie-Style Double-File Restart. When the green flag came out, Hanger got by Page for second, and Herrington passed Dunn for fourth. Williams caught the lapped traffic on lap 18, and Hanger closed to within a car-length by lap 21.

By lap 30, the track had everyone on the bottom groove, and Williams used that to open up a four-tenths of a second lead on Hanger. The second caution flag came out on lap 31 when Dunn blasted the front straightaway wall. The polesitter walked away uninjured, but his race car was done for the night.

The double-file restart on a one-groove track made for some interesting racing when the green flag was waved. Williams was the leader with Hanger, Page, Herrington, Rainey, Brad Skinner, Johns, Wood, Busha and Hickerson doubled up behind him. On the restart, Page drove around the outside of Hanger to take second, and Rainey got by Herrington to take fourth.

Williams caught heavy lapped traffic on lap 37, but he third caution flag came out on lap 39 when the lapped car of Troy Dixon of Dallas, GA in the Granite Hauling and Grading Rocket tangled with Herrington on the back straightaway. This time, track conditions dictated a single-file restart with Williams, Page, Hanger, Rainey, Herrington, Brad Skinner, Johns, Wood, Hickerson and Lloyd in the top ten.

Williams pulled away to a 1.6 second lead over Page by the time he encountered heavy lapped traffic on lap 45. In that traffic, Brad Skinner was able to pass Herrington for the fifth spot on lap 46. Herrington made the VP Racing Lubricants Slick Move of the Race on lap 50 when he found an opening in heavy lapped traffic and passed Brad Skinner and Rainey to take over fourth.

In the last ten laps of the race, Page was gaining on Williams a tenth of the second a lap and closed to within a half a second by lap 55. Just when it appeared lapped traffic would make it battle to the checkered flag; the caution flag came out on lap 58 when Lloyd spun coming off turn two. That took the 18-year-old driver out of the race in the 18th spot, but he was the Cruise With The Champions Rookie of the Race.

Williams took off for the three-lap dash to the finish and Page did not mount a challenge. Williams drove under the checkered flag with a 1.421 second margin of victory. The next race for the Newsome Raceway Parts Crate Rain’ USA Dirt Late Model Series will be a $2,000-to-win $200-to-start 40-lap opening race for the King of the Crates at North Alabama Speedway in Tuscumbia, AL on August 28. That will be followed by a $3,000-to-win race at NAS on August 29.

Newsome Raceway Parts gives a portion of the sales from each Chevrolet Performance Circle Track Engine sold back to the Crate Racin’ USA Point Funds in four different Divisions. Each economical Chevrolet Performance Circle Track Engine is built and sealed at the factory to prevent any expensive modifications. To place an order call 1-877-497-3624.

OFFICIAL RESULTS OF ROUND 8 AT THUNDERHILL RACEWAY IN SUMMERTOWN, TN ON 8/8/2020: