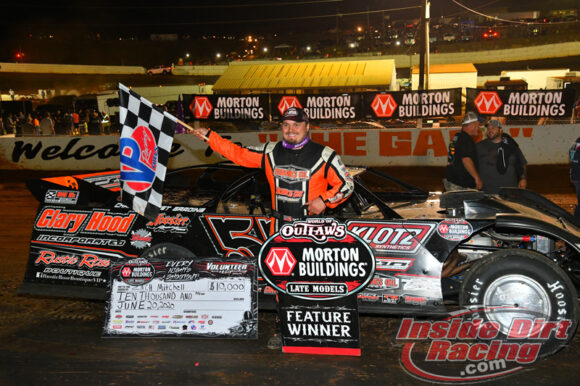 The World of Outlaws Morton Buildings Late Model Series feature held on Saturday night at the Volunteer Speedway in Bulls Gap, TN produced a winner that some might have considered surprising, including the winner himself. Although Zack Mitchell has won numerous features and regional series titles throughout his racing career, even the driver of the No. 57 machine was a bit surprised at the outcome.

While making his way to Bulls Gap from his South Carolina home, the 24-year-old racer was not fully convinced he could pull off such a big victory.

“If you had told me on the way up here that I was fixing to win this race, I would have told you that you were a liar,” Mitchell declared in an interview with InsideDirtRacing.com. “I know we’ve had a good car but this thing ran great tonight. We done everything we had to. We qualified good, we heat raced good, and we got a good draw.”

Winning against the quality of competition entered in any national touring series event is special for regional racers when they are able to pull it off. Mitchell knows there was a great deal of team effort that went into the victory.

“To win against these guys, that’s really saying something,” the two-time and defending Ultimate Super Late Model Series champion stated. “We’re just some old country boys doing stuff on the weekends. I can’t thank all of my help enough. They’ve been working their tails off and I’ve been telling them that if we stick at it we’re going to get us one of these big wins. We just had to stay consistent and stay up front and it finally happened.”

In a race that featured long stretches of green flag action, slower traffic proved to be a factor. But Mitchell was able to keep his pursuers in arrears as the laps clicked off.

“I felt like I could navigate them pretty good but I was just trying to bide my time,” Mitchell recalled. “I was trying to be calmly aggressive, if that’s possible. I knew they were behind me and you can’t give those guys and inch or they’ll take a mile, then the next thing you know, you’d be running fifth. I didn’t really think about what I was doing and everything worked out great.” 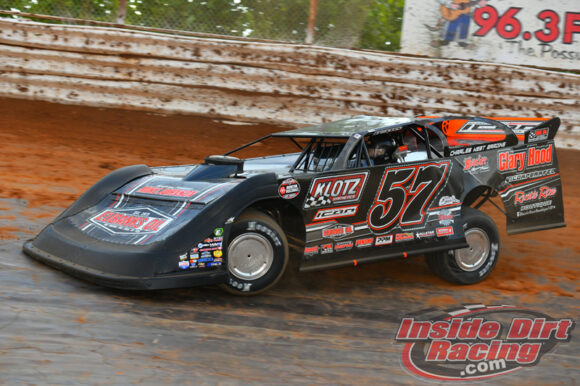 Tending to race most frequently in the Carolinas at tracks such as Lancaster(SC) Speedway and Cherokee Speedway in Gaffney, SC, Mitchell believed his best chance for such a win would likely come on that side of the Appalachian Mountains. Instead, Volunteer Speedway provided the venue for what has been the driver’s biggest win to date.

“If you had told me I was going to win a World of Outlaws race this year I would have told you it was going to be at Lancaster or Gaffney or somewhere around home,” Mitchell explained. “We’ve always run halfway decent at this race track and I love it. It really was a challenge tonight because we don’t normally race on anything this slick and I didn’t really know where to go so I just stuck with where my race car felt the best at and everything went down in our favor.”

Minutes after he had taken the checkered flag, the gravity of what had just happened still had not set in.

“It’s surreal, man,” he said. “Like I say, we do this stuff on the weekend. We’re just some old boys from South Carolina. We love racing and all my help, they bust their tails on this thing every week. If we’ve got to stay up every night until twelve o’clock, they’re there with me. Even my dad will come home then bust his tail at the shop then get up and go to work the next morning just to do it all over again. This is awesome.”

And more than just himself, Mitchell was pleased to deliver a win of this caliber to Barry Wright Race Cars.

“That’s awesome for Barry. I’m glad we’re on top. That means the world to me.”