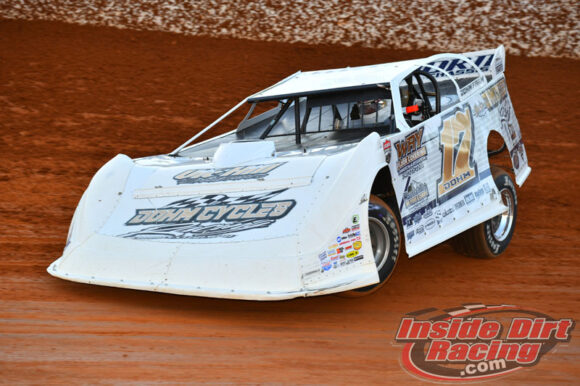 Zack Dohm led all the way to claim the Woolridge Memorial

The 34th annual Paul ‘Butterball’ Woolridge Memorial event took place on Saturday night at the Richmond Raceway. At the night, it was Zack Dohm who claimed the win at the Kentucky tracks in the race sanctioned by the Ultimate Heart of America Series. The Longhorn Chassis driver from Cross Lanes, West Virginia earned $20,059 in a race shown live by Speed51.com.

Ross Bailes earned the pole for the feature by winning the first heat race ahead of Scott James, Henry Hornsby III and Tommy Bailey then Jared Hawkins topped Derek Fisher, Michael Chilton and Larry Martin Jr. in the second preliminary.

At the start of the 59-lap feature it was Dohm who took the early lead with Bailes, Hawkins, Rice and James following. Just after the completion of the first lap, Bailes spun in turn one and numerous cars including Hawkins, Rice, Chamberlain, Ratliff, Martin and Weiss were collected.

Dohm went to the lead following the restart with James, Rice, Carpenter and Chilton trailing. The leader then began to slip away but slower traffic began to come into play until a caution flag waved on lap 7 when Bailes suffered a flat left rear tire.

The top-5 of Dohm, James, Rice, Carpenter and Chilton remained the same following the lap 7 restart. As the laps clicked off, those drivers ran in tight formation as they knifed through slower traffic. However, a lap 19 caution for a spin at the tail of the field provided the front runners with a reprieve

After the restart, Rice moved to the high side in an attempt to make that groove work. Eventually it would as he work out as he emerged from a three-way fight with James and Carpenter to gain the runner-up position.

A lap 32 caution for the stalled car of Chilton slowed the action. On that ensuing restart, Carpenter took third away from James while Ratliff entered the top-5. Soon after, Ratliff would pass by James for fourth.

Hornsby slowed to bring out a yellow flag on lap 36. Carpenter came to second on the restart with James going back to third. Further back, Weiss and Bailes worked to get into the top-5.

Dohm continued to control the race as the field passed the 10 laps to go mark. Then disaster struck for the second running Carpenter as he slowed on lap 54 with smoke coming from his car.

Following the restart, Dohm held the lead and ultimately sailed under the checkered flag to score the victory.