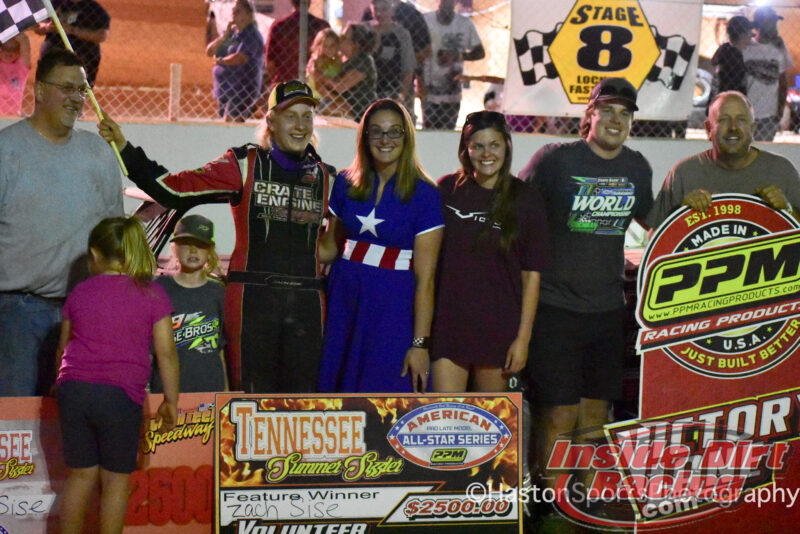 The PPM American Crate All-Stars paid a visit to the Volunteer Speedway in upper East Tennessee Saturday night for the Tennessee Summer Sizzler with Zach Sise holding off Logan Roberson aka “Thugg Nasty” in a caution-filled race.

Sise was fastest in qualifying at the 4/10-mile high banked bullring with Rusty Ballenger starting alongside in the main event. Mack McCarter, Tyler Arrington and Brandon Miller took top honors in each heat, with Sise holding off Ballenger in the PPM Dash.

At the start of the 40-lapper, Sise jumped out to the lead over Rusty Ballenger and Roberson, and held it until the first caution of the night on lap number four, as Ross White dropped what appeared to be oil on the racing surface. On the restart, Sise resumed his dominance until the red flag was brought on lap seven out to honor the late “Rockin” Rodney Kiker who passed away Friday.

Back under green, Sise pulled away once again from Ballenger and Roberson with Roberson grabbing the second position on lap nine. The third caution of the evening was for a spin by Tim Maupin who recovered to earn a top-ten. As they say “cautions breed cautions”, and that held true as Mike Smith had a right front tire go flat. On lap 22, Chris Coffey slowed and pulled off the track with engine issues. The final caution of the night occurred on lap 23 when Tyler Arrington, Smith, Shannon Emery (52e) and Jamie Stanely (5s) piled up in turn one.

From there it, was all Sise who lead wire-to-wire, and held off numerous challenges from Roberson, who tried time and time again to get by the Tennessee Shine Company machine. Following Sise and Roberson to the checkered flag were Mack McCarter, Trevor Sise, and Ballenger who rounded out the top-five.

Up next for the PPM American Crate Al Stars is a trip to recently reopened West Virginia Motor Speedway June 18th.