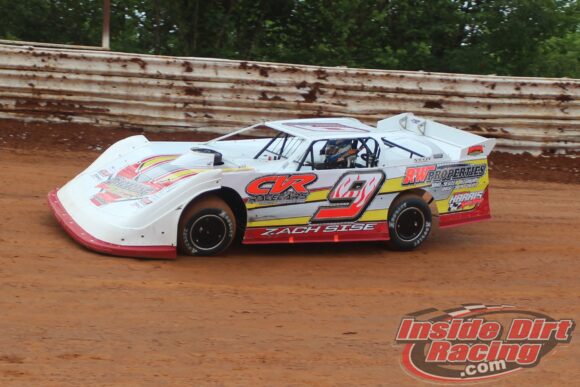 Zach Sise emerged from and early battle to grab the win

Along with the World of Outlaws Morton Buildings Late Model Series the Volunteer Speedway also played host to its regular Crate Late Model division. Zach Sise earned the win in font of a huge crowd and left the Bulls Gap, TN track with the first place prize of $1,500.

At the start of the 25-lap feature it was Ford who would take advantage of his outside front row starting position and grab the early lead. But over the next couple of laps, Ford and Sise would exchange slide job passes before Sise would eventually stake claim to the lead on the third lap.

From that point, the top-4 of Sise, Ford, Henry and White ran in tight formation around the high-baked track as the race ran for its first 23 laps without a caution. With slower traffic becoming a factor, the cars of Ballenger, Trevor Sise and Bland joined the fray along with the top-4 machines.

By lap 20, Zach Sise had extricated himself from the slower traffic and broke away from his closest pursuers. However, a caution on lap 23 would bunch the field for a final dash to the finish.

Sise maintained the lead after the green flag waved and eventually drove under the checkered flag for the win.