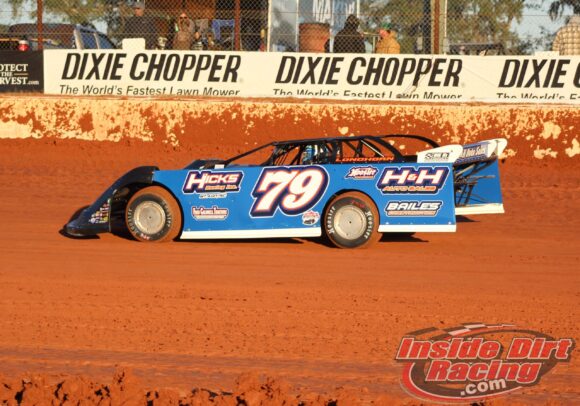 After a bit of a hiatus brought on by uncooperative weather and the fact that many competitors were taking part in Georgia-Florida SpeedWeeks, the Drydene Xtreme DIRTcar Series is now set to resume its racing schedule this Friday and Saturday with a pair of $5,000-to-win shows at Georgia’s Lavonia Speedway. Going into these two events, the top-three drivers in the standings are separated by only 13 points after the first three races held so far by the southeastern-based winter series.

Ross Bailes of Clover, SC currently leads the standings by 8 points over Charlotte’s Carson Ferguson and 13 markers over Ben Watkins of Lancaster, SC.

Bailes scored a win in the series opener at Lancaster(SC) Motor Speedway on November 20, 2021 while Chris Madden of Gray Court, SC took the checkered flag ahead of the pack in the historic Blue-Gray 100 at Cherokee Speedway in Gaffney, SC on November 21, 2021. Cory Hedgecock of Loudon, TN earned an Xtreme win on December 4, 2021 at I-75 Raceway in Sweetwater, TN.

Lavonia Speedway has staged races for the Xtreme DIRTcar Series in each of the tour’s first two campaigns. Zack Mitchell of Enoree, SC won the feature in December of 2019 while Michael Brown of Lancaster, SC came home the winner in December of 2020.

Following this doubleheader weekend of racing action, the series will conclude its 2021-22 schedule of events with a tripleheader on March 24-26 with a $5,000-to-win event at South Carolina’s Lake View Motor Speedway leading off on Thursday night. The series will remain in the Palmetto State with two nights of racing in conjunction with the World of Outlaws CASE Construction Late Model Series at the Cherokee Speedway. The Friday night feature will reward the winner with a $10,000 paycheck while the Saturday night main event is offering up a $20,000 first prize.

There are plenty of reasons for the top-three points runners to race hard in these final events. The series champion will take home $15,000 while second-place will receive $8,000 and $5,000 going to the third-place competitor.