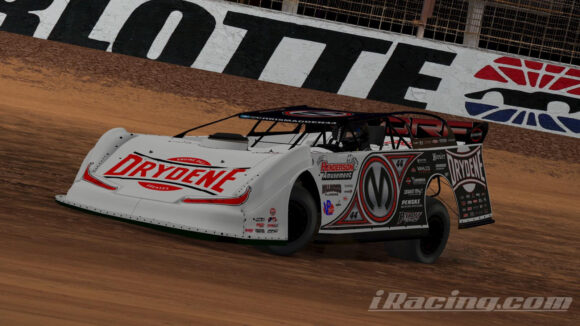 Racing on real race tracks may be all but nonexistent across the United States -and the world for that matter- right now but dirt racing is about to receive exposure like it has rarely ever gotten on Wednesday night at 8:00pm(eastern). At that time the World of Outlaws NOS Energy Drink Sprint Car Series and the World of Outlaws Morton Buildings Late Model Series will team up with iRacing.com to put both tours on display in front of a national television audience via the FS1 network.

Racing events from local dirt and paved short tracks all the way up to IndyCar, NASCAR, and Formula 1 have felt the sting of “shelter in place” suggestions or mandates from local, state and national government entities over the past several weeks. Those shutdowns have driven racers to simulator rigs and fans to television screens as NASCAR and other forms of virtual racing have taken center stage during this COVID-19 health crisis.

Fox Sports has adopted the NASCAR form of iRacing as its feature attraction each of the past two Sundays with events being shown live from the graphically recreated Homestead-Miami Speedway and Texas Motor Speedway. Those broadcasts have drawn viewers in the hundreds of thousands with just under 1 million tuning in for the Homestead race and 1.3 million tuning in to the Texas affair.

On Wednesday night, dirt racing will have its turn in the spotlight on FS1 from the virtual Dirt Track at Charlotte. This will mark the first of a weekly series of iRacing events that will feature a variety of racing disciplines on multiple tracks.

This sort of exposure could stir an interest in dirt racing among sports-starved fans who might then be inclined to visit a dirt track whenever the coronavirus threat has subsided. As has been the case with the two NASCAR-based shows, there will almost certainly be some who have either never been to a dirt track or haven’t been in a long time watching these events.

Racing stars such as Kyle Larson and Christopher Bell from NASCAR, Brad Sweet and David Gravel from the Sprint Car ranks, Late Model competitors Scott Bloomquist and Bobby Pierce, along with Cruz Pedregon and Ron Capps from drag racing are among those expected to participate on Wednesday evening.

While this may not be exactly the same as racing on an actual track, the similarity so far in the NASCAR telecasts has been remarkable. And hey, there won’t be any dirt in your drink, no threat of rain, and no long drive home in the middle of the night as part of this race. It’s not the real thing, but it should be entertaining and will provide something to think about other than projections of exponential growth rates of contagious viruses.

While none of us are glad this pandemic has occurred, it has provided a unique opportunity for a form of racing that many have never been exposed to.