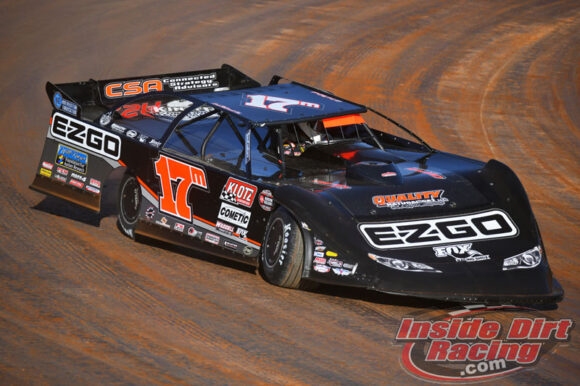 The World of Outlaws Morton Buildings Late Model Series ventured to Florida’s Volusia Speedway Park on Thursday evening to set the three-day Sunshine Nationals into motion. These races are to make up the first racing weekend for the national tour on its 2022 schedule. However, things did not go as was originally planned for the track or the series.

Three divisions were on the grounds and ready for action as the track’s 602 Late Model class was joined by the DIRTcar Pro Late Model division for 604 Crate Late Models, and of course, the WoO Late Models. There were 47 WoO entries, which combined with the other classes, brought the total of cars in the show to almost 170 machines. With hot laps, qualifying, heat races, and B-mains to be run before the features, it would be a long night even under the best of circumstances.

Unfortunately, it was not the best of circumstances. The track, which had received new dirt during the winter months, proved to be rough. Drivers were obviously concerned as several of them made mention of the racing conditions during interviews on streaming service DirtVision.com.

Ultimately, because of the late hour(already 1:00am) and with the track needing more work, track and series officials decided to carry the features races for all three classes into Friday afternoon. Racing will resume at 3:00pm and will then be followed by Friday’s complete program.

Here are the WoO Late Model results from qualifying and heat races held on Thursday:

Kyle Hammer was fastest in Group A qualifying with a lap of 16.046 seconds around the half-mile clay oval to beat out Kyle Larson, Dale McDowell, Chris Madden and Kyle Strickler.

Dale McDowell(see story linked below) was the winner of the first heat race of the night besting Kyle Strickler, Ryan Gustin and Chase Junghans then Chris Madden took the second preliminary ahead of Dennis Erb Jr., Kyle Larson and Jimmy Mars.

Devin Moran was victorious in the third heat of the night over Josh Richards, Shane Clanton and Tyler Bruening while Brandon Sheppard outran Ricky Thornton Jr., Max Blair and Jimmy Owens in the fourth and final heat of the night.

Dale McDowell recovering and ready to hit the track again