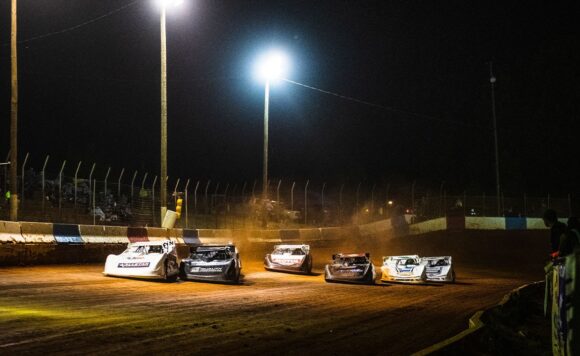 Gaffney, SC – March 21, 2022 – A history-making weekend is on the horizon as the World of Outlaws CASE Construction Late Models return to Cherokee Speedway, March 25-26.

Joining The Most Powerful Late Models on the Planet for the first time is the Drydene Xtreme DIRTcar Series, which will crown a champion Saturday night at the 2nd annual Rock Gault Memorial.

The highly anticipated event kicks off Friday, March 25, in a 40-lap, $10,000-to-win Feature. More money is on the line Saturday, March 26, as the two Series battle for 60-laps paying $20,000 to the winner. If a driver finds Victory Lane on both nights at Cherokee, they could walk away with a $30,000 payday. It’s also the highest-paying weekend in Xtreme DIRTcar Series history.

Even more money is on the line if any driver chooses to run the Xtreme DIRTcar Series event on Thursday, March 24 at Lake View Speedway. The Nichols, SC venue is putting up a weekend bonus. If a driver wins a race at Lake View and Cherokee, they’ll earn an extra $2,000. If someone sweeps the weekend, that driver will receive $5,000.

This weekend will serve as the highest paying weekend in Xtreme DIRTcar Series history.

Local divisions are also on the racing card during both nights at Cherokee. Mid-East 602 Late Models will race on Friday, while Mid-East 602 Modifieds race on Saturday. The Mid-East Street Stocks will run both nights.

Here are some of the storylines to keep an eye on entering Cherokee:

A New Contender: Dennis Erb’s Georgia-Florida Speedweeks put him on the map as a contender to knock Brandon Sheppard off the World of Outlaws throne in 2022.

The Carpentersville, IL driver has already found Victory Lane three times this season and shows no signs of slowing down entering Cherokee.

He has the chance to make it four, but “The Place Your Mama Warned You About” hasn’t been kind to the veteran driver in the past. In three Features in 2021, Erb only finished in the top-10 during a split-field Feature last March.

His best finish at the South Carolina facility since becoming a full-time World of Outlaws driver was sixth in 2019.

Rocket Launch: While he didn’t find Victory Lane at Cherokee Speedway in 2021, four-time and defending champion Brandon Sheppard made the most of his Feature finishes.

He opened last year’s Rock Gault Memorial with a split-field Feature victory and backed it up with a second in last October’s Mike Duvall Memorial.

While the “Rocket Shepp’s” worst finish at Cherokee was a 10th last September, the resiliency of Rocket1 Racing showed that night, as they battled back to the top-10 after a flat tire in the Heat Race.

Sheppard hopes to take the next step toward World of Outlaws history at Cherokee, as his next win ties Josh Richards at the top of the all-time wins list (78).

The New Berlin, IL driver, enters the weekend with two top-fives and five top-10s in six World of Outlaws races this season.

Capital Consistency: A factor in Tyler Bruening’s Rookie of the Year run in 2021 was his success on red clay late in the season. The Decorah, IA driver proved he’s a contender on that surface in last year’s three-race Labor Day weekend swing.

Bruening scored two top-fives and a top-10 in that stretch, including a ninth during last year’s Rock Gault Memorial. That recent success gives Bruening confidence heading into the weekend. He’s already scored a top-fives, and three top-10’s in 2022.

Reaper Rebound: Ryan Gustin is one driver hoping to rebound after an up and down DIRTcar Nationals. The Marshalltown, IA driver won a DIRTcar Late Model Feature at Volusia but struggled during the World of Outlaws portion of the event.

Gustin got his first crack at Cherokee in 2021, but like fellow Iowa driver Bruening, got better as the season moved along. While he cracked the top-10 with a ninth in one of March’s split-field Features, things didn’t go his way as he finished 16th in September.

“The Reaper” had his best finish at Cherokee in last October’s Mike Duvall Memorial—a sixth. He hopes to build off that finish in his return to “The Place Your Mama Warned You About.”

Rookies Collide: After six races at Volusia Speedway Park, two drivers have jumped ahead in the battle for Rookie of the Year—Max Blair and Tanner English.

While he didn’t have the results he hoped for at Volusia, Kyle Hammer also showed early season promise. He scored a top-five finish on the final night of DIRTcar Nationals and led 17 laps in a Feature earlier in the week before running into bad luck.

Championship to the Xtreme: While the World of Outlaws is in the early portion of its season, the Drydene Xtreme DIRTcar Series will crown a champion on Saturday, March 26 at Cherokee.

Co-sanctioning the event at Cherokee with the World of Outlaws, the Xtreme DIRTcar Series championship battle will be the race within the race this weekend. Those racing for the Xtreme title will also being racing against the Outlaws at the same time for the Rock Gault win.

Three races remain on the Xtreme DIRTcar schedule, including a night at Lake View Speedway on Thursday, March 24, and the doubleheader at Cherokee.

Ben Watkins leads the Series standings entering the weekend—16 points ahead of Ross Bailes and 40 points ahead of Carson Ferguson. World of Outlaws drivers are familiar with South Carolina natives Bailes and Watkins as both have pulled an upset win against the Outlaws before. Bailes scored his first career World of Outlaws win at Cherokee in 2019, while Watkins bested Tyler Bruening at Lavonia last year.