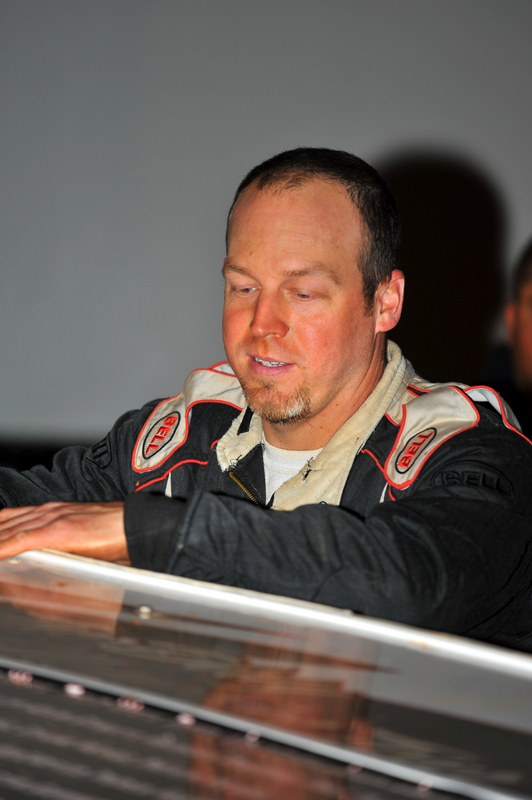 Mike Weeks was poised to have one of his biggest seasons in his racing career. Instead, 2013 turned out to be his most disappointing. And with that, comes uncertainty for 2014.

Weeks was locked in a back-and-forth battle with Riley Hickman for the Southern All-Stars series title. The two traded the points lead a couple of times before surrendering the lead to Hickman with a tough outing at Talladega Short Track in late July. Weeks cut the lead to 46 points following an 11th place finish at Volunteer Speedway.

Just when it looked the two would battle to the final races of the season, Weeks dropped off the circuit and quit racing all together. The reason was simply a financial one for the independent racer.

“I was forced to quit,” Weeks said. “My dad (Lester Weeks) helped me get where I am today. Me and him did it on our own. It got to where we couldn’t do it, financially, any more. My dad isn’t in the greatest of health any way.”

“When David Coty died a few years ago, it took a lot out of us. My dad was pretty close with David. And David was with us every time we went to the racetrack. He was there every time. When he died, it was hard for us to get people to help that could be there every week.”

Weeks added he knew his team would not be able to complete the whole season without additional sponsorship that never came along.

“When we started running Southern All-Stars, I knew we couldn’t do the whole deal,” Weeks added. “We knew we’d need some better sponsors to get us through the whole deal. That never happened. I’m appreciative of the sponsors that did try to help us. But it wasn’t enough to make it through to the end. It takes a lot of money to follow a series like that.”

Dropping off the SAS tour was one of the most difficult things Weeks has had to do in his racing career.

“To be right there with a chance to win the thing made it really hard to quit right there,” Weeks stated. “Riley’s a good racer and I’m not taking anything away from him. But I feel like I had a shot at the points if I could have stayed in it until the end. It’s one of those things that you never know if it would have happened or not. It was just so disappointing not to make it to the end to see if I could have done it or not.”

Weeks sold off much of his racing equipment. He raced a few more times in 2013 for various teams. But heading into 2014, he has no plans at this time.

“I talked to a guy in Georgia, but he wasn’t sure how much he could race,” Weeks said. “I talked to Randle (Chupp) over in North Carolina. I’ve known him a long time. He didn’t know of anything. I drove some for George Delius at the end of the year. He first talked like he wanted to race, then he talked about selling everything, and now he’s said he might race some this year. He’s not sure what he wants to do, so I’m still looking.”

Weeks even spent some time helping out D&R Motorsports late in the season as a crewmember. He is not opposed to taking on that role.

“I thought about going to work for somebody,” Weeks said. “If it’s a way to keep involved in racing, I’ll do it. I went with Danny (Dishman) and them late in the year and got to travel around a little bit. I know what it’s like to do that.”

But Weeks added driving is still his passion.

“If I could race all the time, that’s what I’d do,” Weeks continued. “But I got to do right by my family.”

“There are only three of four big teams in this area. And they’ve all got drivers. It’s hard to get in with one of them.”

“I still want to race. I worry about it everyday. I know I can still do it. It’s not like I was barely making races or just making laps. I put George’s car on the pole at Boyd’s (Speedway). I know I can still drive. I’ve won over 100 features, three track championships, the VRS championship, and was going to finish first or second in Southern All-Star points if I hadn’t dropped out. I just need the right opportunity.”